How can you hear God’s voice on the Earth? 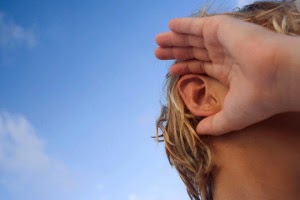 Before Moses gave the law of God to the people of Israel, God confirms His authority uttering the words “Behold, I will come to you in a thick cloud, so that the people may hear when I speak with you and may also believe in you forever.” (Exodus 18:9)(NASB) In Exodus 20:1-17 are the ten commandments spoken by God in the hearing of the people. The people heard the voice of the Lord and trembled and they said to Moses: ”“Speak to us yourself and we will listen; but let not God speak to us, or we will die. (Exodus 20:19)(NASB) Both Adam and Eve’s answer and that of the people of Israel to the words of the Lord were “fear”, but it should have been obedience. God Himself says this: “Oh that they had such a heart in them, that they would fear Me and keep all My commandments always, that it may be well with them and with their sons forever!” (Deuteronomy 5:29)(NASB) What other nation has heard the voice of the Lord besides the people of Israel? None beside them heard the voice of the Lord, however they didn’t obey Him. (Isaiah 64:4)(NASB)

For those who hear and distinguish the voice of the Lord, this implies responsibility. What is this responsibility? To listen to Jesus’ voice who talked to the people on this earth:

“See to it that you do not refuse Him who is speaking. For if those did not escape when they refused him who warned them on earth, much less will we escape who turn away from Him who warns from heaven. And His voice shook the earth then, but now He has promised, saying, “Yet once more I will shake not only the earth, but also the heaven.” This expression, “Yet once more,” denotes the removing of those things which can be shaken, as of created things, so that those things which cannot be shaken may remain. (Hebrews 12:25-27)(NASB)

The voice of the Lord Jesus was heard by people. His words were understood, accepted and written, words that brought changes in attitude, in fulfilling responsibilities and in relationships with one another. We find the words of God and the Lord Jesus written in the Holy Scriptures. This is the voice of God that sounds on the earth through His messengers. Those who hear His voice have a serious responsibility to listen to the voice of God that is a “consuming fire”.

So, let’s keep in mind the words of the Scripture that urges us:

“Today if you hear His voice, do not harden your hearts as when they provoked Me, as in the day of trial in the wilderness, where your fathers tried Me by testing Me, and saw My works for forty years. “Therefore I was angry with this generation, and said, ‘They always go astray in their heart, and they did not know My ways’ as I swore in My wrath, ‘They shall not enter My rest.’” Take care, brethren, that there not be in any one of you an evil, unbelieving heart that falls away from the living God. But encourage one another day after day, as long as it is still called “Today,” so that none of you will be hardened by the deceitfulness of sin. (Hebrews 3:7-13)(NASB)

Seek to know the will of God through studying the Scriptures, and beware of the voice of the world. Do everything God said in His word with all responsibility – this is the way to sharpen your ear for the most delicate sounds of God’s voice.