Who are the nations that will be deceived by Satan at the end of the Kingdom of a thousand years?

The Kingdom of God begins with the Kingdom of a thousand years here on Earth, after the second coming of the Lord Jesus Christ and will continue forever and ever on the new earth.

The Kingdom of a thousand years will be the period when God will put all His enemies under Jesus’ feet so that the Word would be fulfilled:

For He must reign until He has put all His enemies under His feet. (1 Corinthians 15:25)

These are the Gentiles who will enter the Kingdom of a thousand years without experiencing the transformation of the bodies (like the Church and those who will have the first resurrection) and without experiencing the new birth that the Jews will experience at the coming of the Lord Jesus. They are the ones who will marry and will multiply. The children who will be born to them will be those who will have the choice to follow the Lord Jesus or not, but will no longer have an excuse for their sin. They won’t be able to justify that they were tempted by the devil, for at that time the devil will be bound so as not to deceive them. Thus, anyone who will sin at that time will be just his personal choice and will have no excuse.

“But be glad and rejoice forever in what I create; for behold, I create Jerusalem for rejoicing and her people for gladness. I will also rejoice in Jerusalem and be glad in My people; and there will no longer be heard in her the voice of weeping and the sound of crying. No longer will there be in it an infant who lives but a few days, or an old man who does not live out his days; for the youth will die at the age of one hundred and the one who does not reach the age of one hundred will be thought accursed. They will build houses and inhabit them; they will also plant vineyards and eat their fruit. They will not build and another inhabit, they will not plant and another eat; for as the lifetime of a tree, so will be the days of My people, and My chosen ones will wear out the work of their hands. They will not labor in vain, or bear children for calamity; for they are the offspring of those blessed by the Lord, and their descendants with them. It will also come to pass that before they call, I will answer; and while they are still speaking, I will hear. The wolf and the lamb will graze together, and the lion will eat straw like the ox; and dust will be the serpent’s food. They will do no evil or harm in all My holy mountain,” says the Lord. (Isaiah 65:18-25)

So, the nations that will be on earth at the second coming of the Lord Jesus and will enter the Kingdom of a thousand years will multiply; and when Satan will be released, they will be deceived by him and will come up against the camp of the saints:

When the thousand years are completed, Satan will be released from his prison, and will come out to deceive the nations which are in the four corners of the earth, Gog and Magog, to gather them together for the war; the number of them is like the sand of the seashore. And they came up on the broad plain of the earth and surrounded the camp of the saints and the beloved city, and fire came down from heaven and devoured them. And the devil who deceived them was thrown into the lake of fire and brimstone, where the beast and the false prophet are also; and they will be tormented day and night forever and ever. (Revelation 20:7-10) 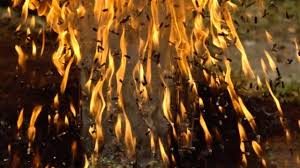 And the word of the Lord came to me saying, “Son of man, set your face toward Gog of the land of Magog, the prince of Rosh, Meshech and Tubal, and prophesy against him and say, ‘Thus says the Lord God, “Behold, I am against you, O Gog, prince of Rosh, Meshech and Tubal. I will turn you about and put hooks into your jaws, and I will bring you out, and all your army, horses and horsemen, all of them splendidly attired, a great company with buckler and shield, all of them wielding swords; Persia, Ethiopia and Put with them, all of them with shield and helmet; Gomer with all its troops; Beth-togarmah from the remote parts of the north with all its troops—many peoples with you. Be prepared, and prepare yourself, you and all your companies that are assembled about you, and be a guard for them. After many days you will be summoned; in the latter years you will come into the land that is restored from the sword, whose inhabitants have been gathered from many nations to the mountains of Israel which had been a continual waste; but its people were brought out from the nations, and they are living securely, all of them. You will go up, you will come like a storm; you will be like a cloud covering the land, you and all your troops, and many peoples with you.” ‘Thus says the Lord God, “It will come about on that day, that thoughts will come into your mind and you will devise an evil plan, and you will say, ‘I will go up against the land of unwalled villages. I will go against those who are at rest, that live securely, all of them living without walls and having no bars or gates, to capture spoil and to seize plunder, to turn your hand against the waste places which are now inhabited, and against the people who are gathered from the nations, who have acquired cattle and goods, who live at the center of the world.’ Sheba and Dedan and the merchants of Tarshish with all its villages will say to you, ‘Have you come to capture spoil? Have you assembled your company to seize plunder, to carry away silver and gold, to take away cattle and goods, to capture great spoil?’”’“Therefore prophesy, son of man, and say to Gog, ‘Thus says the Lord God, “On that day when My people Israel are living securely, will you not know it? You will come from your place out of the remote parts of the north, you and many peoples with you, all of them riding on horses, a great assembly and a mighty army; and you will come up against My people Israel like a cloud to cover the land. It shall come about in the last days that I will bring you against My land, so that the nations may know Me when I am sanctified through you before their eyes, O Gog.” ‘Thus says the Lord God, “Are you the one of whom I spoke in former days through My servants the prophets of Israel, who prophesied in those days for many years that I would bring you against them? It will come about on that day, when Gog comes against the land of Israel,” declares the Lord God, “that My fury will mount up in My anger. In My zeal and in My blazing wrath I declare that on that day there will surely be a great earthquake in the land of Israel. The fish of the sea, the birds of the heavens, the beasts of the field, all the creeping things that creep on the earth, and all the men who are on the face of the earth will shake at My presence; the mountains also will be thrown down, the steep pathways will collapse and every wall will fall to the ground. I will call for a sword against him on all My mountains,” declares the Lord God. “Every man’s sword will be against his brother. With pestilence and with blood I will enter into judgment with him; and I will rain on him and on his troops, and on the many peoples who are with him, a torrential rain, with hailstones, fire and brimstone. I will magnify Myself, sanctify Myself, and make Myself known in the sight of many nations; and they will know that I am the Lord.”’ (Ezekiel 38)

In the book “The Ezekiel Option” written by Joel Rosenberg you can find an analysis of this text from Ezekiel 38, where the author, based on the researches of many historians and theologians, demonstrates who these nations are that will come up against Israel at the time of the end (in the last days), when Israel will live in peace and safety (the Kingdom of a thousand years). Based on the studies made by Joel Rosenberg, in the book it is shown that Magog is Russia (Flavius Josephus in his writings mentions that the Greeks call the people Magog skits, a people who lived in southern Russia), the prince of Rosh (Russia), Meshech (Moscow) and Tubal (Tobolsk). Persia is Iran. According to the historian Flavius Josephus, Put is the founder of Libya, which once included Algeria and Tunisia. Sheba and Dedan are ancient names of Saudi Arabia and the Persian Gulf countries. Beth-togarmah would be Armenia, because in Assyrian writtings it is reported about the territory of Armenia as the house of Beth-togarmahand and so are named the Armenians in their writings. Gomer would be Turkey or Germany. For more details, you can read this book as a source of information.