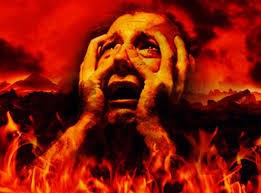 I write this article to continue answering the question I have been asked about the destiny of people after death. I have written an article before, entitled What happens with Christians after death and The destiny of good people who have never heard the message of the Gospel. In this article I propose you to look at the text of the Holy Scripture to see what is the destiny of people who heard the message of the Gospel of the Lord Jesus Christ, had the possibility and were urged to read the Bible, or they even read it, but refused to believe and to enter a covenant with the Lord Jesus Christ. What is the destiny of these people after their physical death?

The souls of unbelievers go to Hades

Woe to you, Chorazin! Woe to you, Bethsaida! For if the miracles had occurred in Tyre and Sidon which occurred in you, they would have repented long ago in sackcloth and ashes. Nevertheless I say to you, it will be more tolerable for Tyre and Sidon in the day of judgment than for you. And you, Capernaum, will not be exalted to heaven, will you? You will descend to Hades; for if the miracles had occurred in Sodom which occurred in you, it would have remained to this day. (The Gospel of Matthew 11:21–23)(NASB)

It is absolutely clear from this passage that Hades is in contrast with heaven and it is a place where people descend, somewhere very deep, as the whole Scripture confirms.

Hades is a place of torment, where unbelievers wait for judgment

Lord Jesus related in the Gospel of Luke the following case about the lives and death of two persons:

Now there was a rich man, and he habitually dressed in purple and fine linen, joyously living in splendor every day. And a poor man named Lazarus was laid at his gate, covered with sores, and longing to be fed with the crumbs which were falling from the rich man’s table; besides, even the dogs were coming and licking his sores. Now the poor man died and was carried away by the angels to Abraham’s bosom; and the rich man also died and was buried. In Hades he lifted up his eyes, being in torment, and saw Abraham far away and Lazarus in his bosom. And he cried out and said, ‘Father Abraham, have mercy on me, and send Lazarus so that he may dip the tip of his finger in water and cool off my tongue, for I am in agony in this flame.’ (The Gospel of Luke 16:20–24)(NASB)

The rich man lived his life ignoring the faith in God. In Hades, he was in agony and in torment and if anyone touched his lips with the tip of the finger dipped in water, it would have cooled off his tongue. So, Hades is a place where those who rejected the faith are in agony in flame.

Those who lived their lives knowing about Lord Jesus, but refused to believe and to be obedient to Him will spend time in Hades, until the setting up of one thousand year kingdom, and after some other events take place, described in the Book of Revelation. Then they will come at the great white Throne of Judgment, that is also called the last judgment and it is described by Apostle John, to whom God has showed these events:

Then I saw a great white throne and Him who sat upon it, from whose presence earth and heaven fled away, and no place was found for them. And I saw the dead, the great and the small, standing before the throne, and books were opened; and another book was opened, which is the book of life; and the dead were judged from the things which were written in the books, according to their deeds. And the sea gave up the dead which were in it, and death and Hades gave up the dead which were in them; and they were judged, every one of them according to their deeds. Then death and Hades were thrown into the lake of fire This is the second death, the lake of fire. And if anyone’s name was not found written in the book of life, he was thrown into the lake of fire. (Revelation 20:11–15)(NASB)

In the book of life are written only the names of those who believed in Jesus Christ will their heart and entered the covenant with Him, obeying Him with all their life. Let no one think that he can be saved by his deeds, because it is written in the Bible:

For all have sinned and fall short of the glory of God (Romans 3:23)(NASB)

And it also writes:

For the wages of sin is death, but the free gift of God is eternal life in Christ Jesus our Lord. (Romans 6:23)(NASB)

So, there is no one who lived his life in such a way to be saved in the day of judgment.

Unbelief is the greatest sin

The saddest thing is that the greatest sin the unbelievers will be accused at the last judgment is their unbelief, as the Lord Jesus Christ said:

He who believes in Him (Jesus Christ) is not judged; he who does not believe has been judged already, because he has not believed in the name of the only begotten Son of God. (John 3:18)(NASB)[fwduvp preset_id=”0″ playlist_id=”0″]

The torment of unbelievers will not end

When It talks about the lake of fire and brimstone, where all unbelievers will be thrown after the last judgment, and where the devil and his angels will also be, the Holy Scripture says that it is an eternal torment. Here is an example:

And the devil who deceived them was thrown into the lake of fire and brimstone, where the beast and the false prophet are also; and they will be tormented day and night forever and ever. (Revelation 20:10)(NASB)

This is the destiny of the people who rejected the faith in the Lord Jesus Christ, the Son of God who was sacrificed for their sins. Do not be an unbeliever. Look for the Bible, read and believe the words of God to be saved. Tell all your friends, relatives, colleagues and all people. Tell them about the Lord Jesus so that they may be saved and may not go to that place of torment.