It seems that you are confusing the receiving of the Holy Spirit with the baptism with the Holy Spirit. Biblically, I don’t see these events to be the one and the same event. Can you explain yourself? In the book of Acts, apostle Peter says to the listeners to repent, to be baptized and then they will receive the gift of the Holy Spirit. This tells me that it will happen in the future, the verb is at the future tense – you WILL receive. It is a succession of events. This principle is also supported by other passages from the book of Acts such as the Christians from Samaria, the house of Cornelius, the disciples of John the Baptist from Ephesus. When I read these texts, I understand that the receiving of the Holy Spirit occurs after repentance, after the new birth. 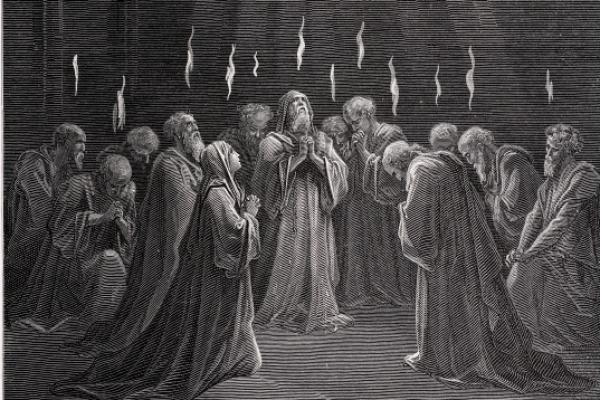 We have to mention that in this text, the apostle Peter speaks to the people who, during the three and a half years were witnesses of everything the Lord Jesus did and spoke. But they did not receive His message and did not believe in Him. After the apostle Peter’s sermon, these people were pierced to the heart and believed in the Lord Jesus, whom they condemned to death 50 days before (it was an obligation for all Jews to come to Jerusalem to worship God three times a year: at the Passover, at the day of Pentecost and at the Feast of Booths). Peter specifies to them that they have to repent and “to be baptized in the name of Jesus Christ for the forgiveness of their sins” and then they will receive the gift of the Holy Spirit. Also the apostle Peter in his first epistle (1 Peter 3:21) writes that the baptism is not a  removal of dirt from the flesh, but an appeal to God for a good conscience, i.e. the man testifies that through repentance he has cleaned his conscience. If we return to the text from Acts 2:38-41, it says that, in that day, there were added about three thousand souls.

Peter said to them, “Repent, and each of you be baptized in the name of Jesus Christ for the forgiveness of your sins; and you will receive the gift of the Holy Spirit. For the promise is for you and your children and for all who are far off, as many as the Lord our God will call to Himself.”  And with many other words he solemnly testified and kept on exhorting them, saying, “Be saved from this perverse generation!”  So then, those who had received his word were baptized; and that day there were added about three thousand souls. Acts 2:38-41

During those times, there was a cult of public baths in Israel. We have returned from Israel recently. Being there, you begin to understand differently many things. In all the old towns (the fortress ruins) there are many public baths. After they went to the market, the Jews would bathe lest they touched something unclean in the market without realizing and not to remain unclean. There was a bath at the basement of the Temple, and people who came to worship at the Temple, would go downstairs and after having taken a bath and changed their clothes, they would climb another set of stairs (to avoid touching people who did not clean yet). In this way, the Hebrew principle of cleaning by water was formed. That’s why the Apostle Peter mentions that the baptism with water is not a removal of dirt from the flesh.

If we look at the Samaritans’ case (Acts 8) and at the case of the disciples of John the Baptist from Ephesus (Acts 9), we see that those who believed, were first baptized in water in the name of the Lord Jesus and then the Holy Spirit fell upon them. In the case of the house of Cornelius the things went conversely: they believed first the message of the Gospel, received the Holy Spirit and then were baptized with water.

While Peter was still speaking these words, the Holy Spirit fell upon all those who were listening to the message. All the circumcised believers who came with Peter were amazed, because the gift of the Holy Spirit had been poured out on the Gentiles also. For they were hearing them speaking with tongues and exalting God. Then Peter answered, “Surely no one can refuse the water for these to be baptized who have received the Holy Spirit just as we did, can he?”
Acts 10:44-47

The events described in Acts chapter 10 happened about 10 years after the death and the resurrection of the Lord Jesus. Till then, the Jews thought that the salvation is just for them, the God’s chosen people (Exodus 19). Cornelius and his house were the first from the Gentiles who received the Holy Spirit.

Because the Jews were looking at the Gentiles like at something unclean and did not have any connection with them, Peter, when he returned to Jerusalem, had to give an explanation to the Jews why he entered the house of Cornelius. Apostle Peter makes a conclusion to what happened there, and it is clear that the receiving of the Holy Spirit, the falling of the Holy Spirit and the baptism with the Holy Spirit are different ways of expression the one and the same event:

And as I began to speak, the Holy Spirit fell upon them just as He did upon us at the beginning. And I remembered the word of the Lord, how He used to say, ‘John baptized with water, but you will be baptized with the Holy Spirit.’ Therefore if God gave to them the same gift as He gave to us also after believing in the Lord Jesus Christ, who was I that I could stand in God’s way?”  When they heard this, they quieted down and glorified God, saying, “Well then, God has granted to the Gentiles also the repentance that leads to life.”
Acts 11:15-18

Therefore, if we look at the texts from Acts chapters 10 and 11, we see that for the same event, which happened at the house of Cornelius, these expressions were used: “the Holy Spirit fell upon them”, “the gift of the Holy Spirit had been poured out on the Gentiles”, “they received the Holy Spirit”, “baptized with the Holy Spirit”.

Before His ascension to Heavens, the Lord Jesus commanded His disciples not to leave Jerusalem, but to wait for what the Father had promised (Joel 2:28-31), about which He told them again and again (John 7, 14, 16…). The Lord Jesus also names this event the baptism with the Holy Spirit:

Gathering them together, He commanded them not to leave Jerusalem, but to wait for what the Father had promised,“Which,” He said, “you heard of from Me; for John baptized with water, but you will be baptized with the Holy Spirit not many days from now.”
Acts 1:4-5 but you will receive power when the Holy Spirit has come upon you; and you shall be My witnesses both in Jerusalem, and in all Judea and Samaria, and even to the remotest part of the earth.”
Acts 1:8

From John chapter 3 we see that the new birth is a birth of the Spirit, which leads to a conversion of life; and this was seen very well in the apostles’ lives: a radical transformation on the day of Pentecost, when the Holy Spirit came upon them, i.e. they received the promise of God which they heard from the Lord Jesus and thereby were baptized with the Holy Spirit, being transformed, i.e. newly born. Knowing the significance of the word “baptized” helps us to understand this subject better.