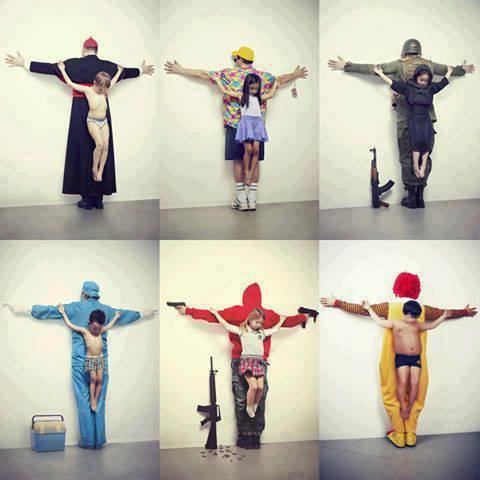 Long time ago I received this question from a visitor of the portal:

I don’t really understand why my descendants should bear my sins … Isn’t a child born pure?

Even if write it later, I will use this article to answer the asked question.

Children are born with a sinful nature

I will begin to answer with the second part of the question, namely that children are not born pure, or without sin, but they are born with a sinful nature. In the book of psalms, king David, when he was repenting for the sin committed with Bath-Sheba and for killing Uriah the Hittite, he said:

Behold, I was brought forth in iniquity, and in sin my mother conceived me. (Psalm 51:5)(NASB)

He did not say by this that his mother had been an easy woman or that he had been born as the result of adultery, but he said that the sinful nature had been sent him since birth and that all people have it and it is sent by heredity. The same thing is told by Apostle Paul in the Epistle to Romans, when he says:

Therefore, just as through one man sin entered into the world, and death through sin, and so death spread to all men, because all sinned. (Romans 5:12)(NASB)

God punishes the iniquity of the parents in their children

This thing is confirmed in the second of the Ten Commandments, when God warns people of the seriousness and consequences of idolatry and He says:

You shall not make for yourself an idol, or any likeness of what is in heaven above or on the earth beneath or in the water under the earth. ”You shall not worship them or serve them; for I, the LORD your God, am a jealous God, visiting the iniquity of the fathers on the children, on the third and the fourth generations of those who hate Me, but showing lovingkindness to thousands, to those who love Me and keep My commandments. (Exodus 20:4-6)(NASB)

God’s blessing for the descendants exceeds the punishment

Then the LORD passed by in front of him and proclaimed, “The LORD, the LORD God, compassionate and gracious, slow to anger, and abounding in lovingkindness and truth; who keeps lovingkindness for thousands, who forgives iniquity, transgression and sin; yet He will by no means leave the guilty unpunished, visiting the iniquity of fathers on the children and on the grandchildren to the third and fourth generations.” (Exodus 34:6-7)(NASB)

Certainly that anyone will question how can children bear at the same time the blessings of some parents or grandparents and the punishment of others? Here is a certain case written on the pages of Holy Scriptures.

Parents died in the wilderness and children entered Canaan

After they came out the slavery of Egypt, led by Moses, people came to the borders of the country of Canaan. From Cades-Barnea, Moses sent 12 spies to investigate the country. When they returned, 10 of them spoke bad and frightened the people so that they grumbled against God. Because of their unbelief, the Most High decided that they would not enter the promised country and He also said:

Due to the blessing of Abraham, Isaac and Jacob, children were sent free from the Egyptian slavery and entered the country of Canaan, but because of the parents who gave birth to them, they had to wander through the wilderness forty years. Isn’t it the same nowadays? Don’t we bear the consequences of the generation that denied God so quickly, and until now live in unbelief, looking back to Egypt of the atheistic Communism? But what inheritance do you leave your heirs? Will any of them have to wander through the wilderness of despair, poverty and immorality because of the unbelief in which you live today?

In the communist regime many were sent to concentration camps in Siberia because their parents had been accused of something. God says very definitely in the Holy Scriptures:

People have always exceeded their cruelty and sought to punish parents for children or inversely. Here is an example what writes one of the law of the oldest legislation of the world, the code of Hammurabi:

As you see, that code of laws foresaw to kill the son for the sin of the father, which was a crime and an abomination before God.

God doesn’t want the death of the sinner

During the time of the prophet Ezekiel, some of the people of Israel that were in the Babylonian slavery thought that they didn’t have their own guilt before God and that they were in that slavery only because of the sins of their parents. Thus, they were even saying this: “The fathers eat the sour grapes, but the children’s teeth are set on edge?” In chapter 18 of the book of the prophet Ezekiel God deals with this subject and He shows people that He does not kill the child who lives right for the parent who lives in iniquity and vice versa, He doesn’t excuse from death the child who lives in iniquity because his father was a righteous man. God in His goodness is ready to forgive everyone and He says:

Dear reader. I do not know how is your life and the problems you face. I do not know how your parents or your grandparents lived and what spiritual inheritance they left you. Maybe now you suffer the consequences of their sins and the consequences of your own sins. Do not think that God finds pleasure in this state of yours. No way. He loves you so much that He gave His only begotten Son to death, so that you could get a perfect forgiveness and a new heart through this perfect sacrifice. Come with all your heart to Jesus, make a covenant with Him by faith and choose to study the Holy Scriptures to know and to follow His way in all things. God help you so.