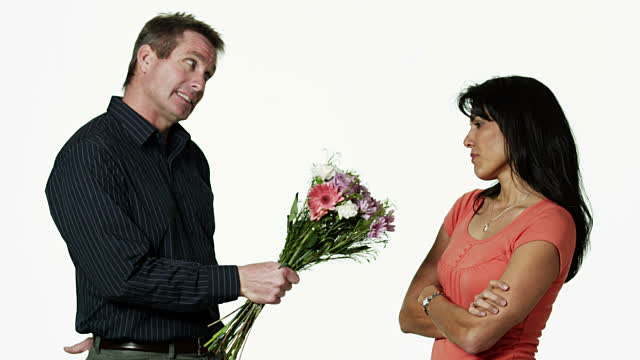 It seems that desperation made a reader ask the following question:

Are really all guys liars? Why do they say that they love us if they do not believe in their words by themselves? Why do they lie us with no shame, do they really believe that girls are so naive?

Here are some reasons why men make declarations of love easier or harder.

Because men have to make the declaration of love

God has set so, that man is the one who takes the initiative in building the relationship that will lead to marriage, and the declaration of love is this step that discloses his intent. After God brought the first woman to the first man and instituted the first family on earth, He said:

However, every woman should know that when a man is truly in love with a woman and he intends to marry her, he will make that declaration of love difficult, with fear and fright, being afraid not to receive a negative response.

Some seduce in this way

But, if someone tells you too fast the words “I love you”, you should be attentive, because he might be a Don Juan, who seeks to draw you in an immoral sexual relation and thus to use you as a cloth, then leave you hurt and desperate. Immoral men, who see women as toys for sex, are clever in finding means of cheating. They know that every woman wants to hear that she is loved, and give herself to the man who truly loves her. Therefore, they will do their utmost to make you believe that they really love you in order to bring you in bed and that’s it.

In the Bible it is reported the case when Amnon, one of David’s son, became sexually obsessed with his sister, Tamar, the daughter of his father. Being taught by a cowardly man, he faked sick to be able to attract Tamar in his room and to remain only with her, thus laying her traps. Here is how the Bible relates this case:

Then Amnon said to Tamar, “Bring the food into the bedroom, that I may eat from your hand.” So Tamar took the cakes which she had made and brought them into the bedroom to her brother Amnon. When she brought them to him to eat, he took hold of her and said to her, “Come, lie with me, my sister.” But she answered him, “No, my brother, do not violate me, for such a thing is not done in Israel; do not do this disgraceful thing! As for me, where could I get rid of my reproach? And as for you, you will be like one of the fools in Israel. Now therefore, please speak to the king, for he will not withhold me from you.” However, he would not listen to her; since he was stronger than she, he violated her and lay with her. Then Amnon hated her with a very great hatred; for the hatred with which he hated her was greater than the love with which he had loved her. And Amnon said to her, “Get up, go away!” But she said to him, “No, because this wrong in sending me away is greater than the other that you have done to me!” Yet he would not listen to her. Then he called his young man who attended him and said, “Now throw this woman out of my presence, and lock the door behind her.” (2 Samuel 13:10-17)(NASB)

I want to draw the reader’s attention to the fact how the attitude of this possessed man was changed after he accomplished his treacherous purpose. He hated Tamar more than he had loved her the other time … Be careful not to fall prey to someone who is sexually obsessed by your person and he says that he loves you that you may be caught in the trap he wants to lay you.

How can you know if the declaration of love is honest and well-intended?