I have a question: Does the Holy Church say that neither St. Paul nor all the saints, nor God’s messengers promote an anti-sex attitude? Right? Yes, right. Well then what about the articles about ”joining”, which prohibit sexual relations on Wednesday, Friday, Saturday, Sunday, in the fast time, at the holidays with the red, black cross, two days before going to church, a day after you were to church, one week before Communion, when you are on stop, pregnant, breast-feeding? I have not seen any priest to publish on his blog articles condemning having a cup of coffee, walking in the park, watching TV, eating in such periods. What is the difference between having sex and watching TV? Why is the first activity inferior to the second? Both are sources of relaxation. So, why do you jump up when talking about sex? Isn’t it a clear indication of the “anti-make-love” attitude? Some say that one shall not act so in all periods listed by me, the opinions of priests are divided. The conclusion is that religion is relative and everyone calls to it to justify his own stereotypes. Isn’t it so? If not, then how do priests read and interpret the Bible differently and then come on Internet to give so called advice, as I have mentioned above? (the message has undergone changes because of indecent and derogatory expressions)

I recommend you a course 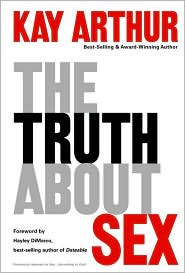 “The truth about sex” course by Kay Arthur is a very deep one and I recommend it to everybody who wants to have a biblical understanding on this subject.

And if you do not want or can not get the book, out of respect for your own soul, make sure you read the Bible in its entirety and note in a notebook everything you find about sex. You will be astonished to learn that God is the author of sexual relations and He set the framework and the rules for this important aspect of human life.

The charges are groundless

At least if you refer to articles on this portal, please read at least some of them to see that the statements you have made are not right.

And another thing, religion, yes, perhaps it is relative, if you think about the different approaches and interpretations that people give, but God’s Word – the Bible is accurate and absolute truth. Why don’t you read the Bible?

Is sex just a source of relaxation?

No, sex has deep moral and spiritual implications. In marriage it brings happiness to those who live in obedience to God and out of wedlock, no matter how sex is practiced, it brings a lot of pain, death and destruction, even if one does not feel them at the moment. As with drugs, when one applies them, s/he feels so good, but they work death in that person that will soon come. It is the same with sex outside marriage. If sex were a simple method of relaxation, as you write, you would not come on this portal to express your dissatisfaction. You came here because your consciousness is loaded with guilt and you want to oppose it.

I advise you to read the Bible at least to know why you started to condemn and deny. Or you think otherwise?