I would like to know who interrupted the continual offering: Jesus or  the Romans in the year 70 AD ? If the Romans interrupteed it, is Jesus Christ the Lamb of God, who takes away the sin of the world, making the propitiation? 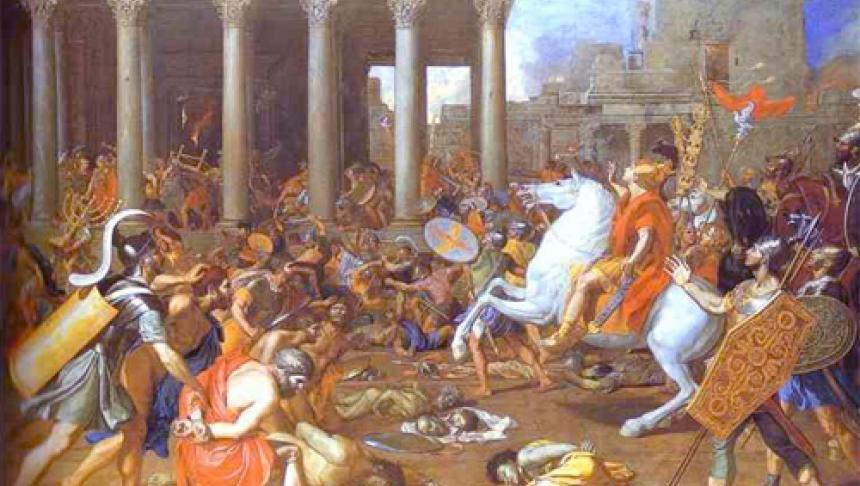 For the Law, since it has only a shadow of the good things to come and not the very form of things, can never, by the same sacrifices which they offer continually year by year, make perfect those who draw near.
(Hebrews 10:1)
Therefore, when He comes into the world, He says,
“Sacrifice and offering You have not desired,
But a body You have prepared for Me;
In whole burnt offerings and sacrifices for sin You have taken no pleasure.
“Then I said, ‘Behold, I have come
(In the scroll of the book it is written of Me)
To do Your will, O God.’”
After saying above, “Sacrifices and offerings and whole burnt offerings and sacrifices for sin You have not desired, nor have You taken pleasure in them” (which are offered according to the Law),  then He said, “Behold, I have come to do Your will.” He takes away the first in order to establish the second.  By this will we have been sanctified through the offering of the body of Jesus Christ once for all.
(Hebrews 10:5-10)

Form this text we see that, through His  work, He superseded the Old Covenant to the New Covenant (replaced). The Lord Jesus, Himself, said that He did not come to abolish the Law or the Prophets, but to fulfill them:

“Do not think that I came to abolish the Law or the Prophets; I did not come to abolish but to fulfill. For truly I say to you, until heaven and earth pass away, not the smallest letter or stroke shall pass from the Law until all is accomplished.
(Matthew 5:17-18)

Moreover, from the prophecies we know that before the second coming of the Lord Jesus, after the rapture of the Church, the Temple from Jerusalem will be rebuilt and the people of Israel will restore the temple worship, according to the law of the Old Testament and then for the last time the continual offering will be interrupted by the antichrist who will take his seat in the temple of God, displaying himself as being God.

Then after the sixty-two weeks the Messiah will be cut off and have nothing, and the people of the prince who is to come will destroy the city and the sanctuary. And its end will come with a flood; even to the end there will be war; desolations are determined.  And he will make a firm covenant with the many for one week, but in the middle of the week he will put a stop to sacrifice and grain offering; and on the wing of abominations will come one who makes desolate, even until a complete destruction, one that is decreed, is poured out on the one who makes desolate.”
(Daniel 9:26-27)

From this text we see that, at the time of the end, the continual offering will be interrupted by a prince, who will rise from that people, who destroyed the Temple and Jerusalem after the crucifixion and resurrection of the Lord Jesus.
Therefore, the Lord Jesus had never interrupted the continual offering, but He came to fulfill what these offerings proclaimed and He is the Lamb of God, who takes away the sin of the world and makes the propitiation for all, but God, who is merciful and faithful, after the work, for the salvation of the Church (composed of Hebrews and Gentiles), will end, He will save His people Israel according to the promises to Abraham, Isaac and Jacob, as it is written:

For I do not want you, brethren, to be uninformed of this mystery—so that you will not be wise in your own estimation—that a partial hardening has happened to Israel until the fullness of the Gentiles has come in;  and so all Israel will be saved; just as it is written,
“The Deliverer will come from Zion,
He will remove ungodliness from Jacob.”
“This is My covenant with them,
When I take away their sins.”
From the standpoint of the gospel they are enemies for your sake, but from the standpoint of God’s choice they are beloved for the sake of the fathers; for the gifts and the calling of God are irrevocable.
(Romans 11:25-29)

Therefore, the continual offering was interrupted in the year 70 AD by the Romans, and not by the Lord Jesus, but this does not mean that the Lord Jesus is not the Lamb of God, who takes away the sin of the world!
I recommend you to study the courses ,,Daniel” and ,,Revelation” written by the inductive method.