I recently read in a comment the following statement: “The Holy Spirit descends over the water that the priest sanctifies”. I want you to explain us if lifeless things can be sanctified or holiness refers exclusively to people? Thank you. 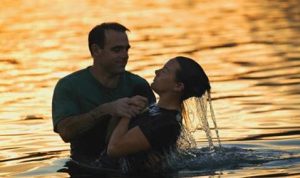 The first reference in the New Testament is found in the Gospel of Luke, where it is written about Lord Jesus’ baptism, namely:

Now when all the people were baptized, Jesus was also baptized, and while He was praying, heaven was opened, and the Holy Spirit descended upon Him in bodily form like a dove, and a voice came out of heaven, “You are My beloved Son, in You I am well-pleased.” (Luke 3:21-22)(NASB)

Centurion Cornelius, after seeing a vision, called the Apostle Peter who came and told them the Gospel of salvation.

While Peter was still speaking these words, the Holy Spirit fell upon all those who were listening to the message. (Acts 10:44)(NASB)

After this case, when Peter went to Jerusalem and was reprimanded by the Hebrew Christians of the fact that he had allowed to enter the house of Cornelius who was uncircumcised, the Apostle Peter made a report and said about Cornelius and those gathered in his house who had heard the Gospel:

And as I began to speak, the Holy Spirit fell upon them just as He did upon us at the beginning. (Acts 11:15)(NASB)

When the Apostle Paul was at Ephesus, he met some disciples of John who had not yet received the Holy Spirit. Scripture tells us:

And when Paul had laid his hands upon them, the Holy Spirit came on them, and they began speaking with tongues and prophesying. (Acts 19:6)(NASB)

I do not know any passages of the Scripture, where it says that the Holy Spirit descends over the water that the priest sanctifies.

If anyone knows such references or arguments for this claim, I am curious to read them too, if they will post them at the comments.