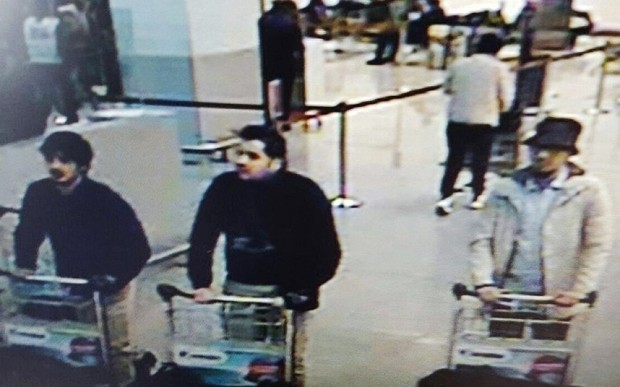 George Bush, one of the former presidents of the United States of America said that

“Not all Muslims are terrorists, but all terrorists are Muslims”

What happened in Brussels shook the whole world. Terrorists enjoy and celebrate but Europe is “shaken”. Whenever another disaster happens, the Islamic community makes public statements saying that attackers were not true Muslims, Islam is not a religion of war but of peace.

Thus they did on September 11th, 2011; thus they did on November 13th, 2015 in Paris, and the same way they do it now. It is an evil’s tactic to lie and bring misunderstanding into the world. Yes, not all Muslims are savagely and terrorists, I agree with this. Someone said of all muslims who live in the whole world that between 15-25% are radicals, and the rest are not. However, this percentage of 15-25% would be 300 million people. This would compare to the population of the whole USA. Can you imagine: an entire country of 300 million of radical people are spread across the whole world? That is kind of dangerous to represent this people…

One time, I spoke with a refugee Afghani in the United States. And when we started to talk about faith, he told me, ”Christianity is a religion left behind and needs an update; and Islam is an update that Christianity needed. Islam is the last revelation, the most extraordinary; and when people follow Islam teachings, they acquire blessings and prosperity of God.” If I didn’t know where he was from and what the situation is in the muslim countries in the Middle East, maybe I would try to believe that man. But I asked him, “Tell me, if Christianity is a religion left behind and needs an update, and Islam is the form of religion that brings just blessings, then why did you run from your country who proclaims to be 99.9% Muslim? And you come to a country that is more developed, with Christian values, is left behind and untrue in your opinion? Then again, why do you run from a country who has at its base Sharia and “religion updating” and came to a country that has at its base Bible values (at least it has in the past).” The Muslim man was lost for a minute because maybe he never thought of it this way, and then he just told me, “God is over all the earth, and I can live wherever I want!” It is exactly so with most refugees who come to Europe today. It is interesting that Muslim countries with very good economy refuse to accept them, and the refugees also do not want to go there but move to European countries who at least nominally declare that they are Christian.

Mohamed in one of Hadith said, “If you are weak and can’t cut the hand of your enemy, kiss it; and when you will be strong, you will cut it”. In other words, as long as you are weak, claim to be obedient; and when you become strong, you can do what you want. The radicals from Europe are minority today, but how much terror they have done! Try to imagine: one day, they become majority…and I don’t know how the muslims declaring they are peaceful today will behave then if tomorrow they become to be majority. Were those two kamikaze Muslims? Yes! According to Qur’an teachings, the jihadists are the closest of Qur’an teachings. I recommend you to read the book “Islam and Terrorism” by Mark Gabriel, a former Muslim, and you will find the proofs about this topic.

Qur’an calls Muslims by saying that:

…That is because those who disbelieve follow falsehood, and those who believe follow the truth from their Lord. Thus does Allah present to the people their comparisons.So when you meet those who disbelieve [in battle], strike [their] necks until, when you have inflicted slaughter upon them, then secure their bonds, and either [confer] favor afterwards or ransom [them] until the war lays down its burdens. That [is the command]. And if Allah had willed, He could have taken vengeance upon them [Himself], but [He ordered armed struggle] to test some of you by means of others. And those who are killed in the cause of Allah – never will He waste their deeds.He will guide them and amend their condition And admit them to Paradise, which He has made known to them. (Surah 47:3-6) Sahih International

When terrorists give their lives to take another, they are taught that they “are killing in the cause of Allah”, and their reward will be

“…admit them to Paradise, which He has made known to them”.

No Muslim, as godly as can be, is not sure that when he will die, he will go to heaven except that who dies in “the name of Allah”. That’s why Qur’an says:

And never think of those who have been killed in the cause of Allah as dead. Rather, they are alive with their Lord, receiving provision,Rejoicing in what Allah has bestowed upon them of His bounty, and they receive good tidings about those [to be martyred] after them who have not yet joined them – that there will be no fear concerning them, nor will they grieve. (Surah 3:169-170) Sahih International

May God bring comfort to mourning families who suffer after that attack at Belgian airport. I pray that church would wake up and go with gospel to refugees who live in Europe. Not just to go with Gospel of peace but give them a chance to make peace with God and save their souls from hell.

In the end, I want to specify an important thing: I don’t hate Muslims. Contrary, I pray for them that God makes them free of sin. I motivate the church to not fall into the trap of haters toward them, but to show them the love of God, to go to them with many courage to share Christ who has died and rose from the death for every sinner including Muslims. We are called to have the mind of Jesus Christ, to give our lives and not take others as terrorists do, but to save the souls for the eternal life. May God help us in that.