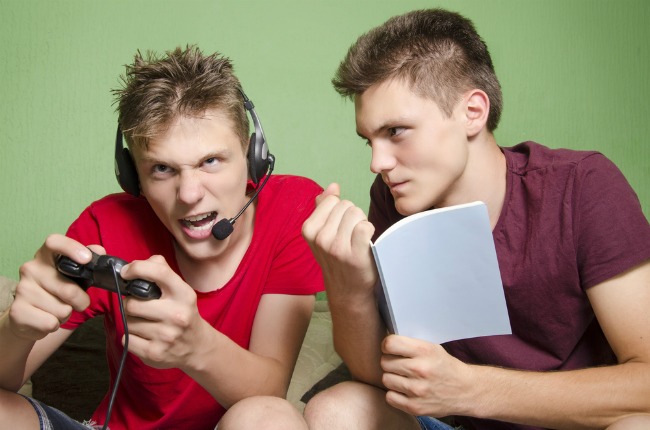 Virtual games or computer games became very spread nowadays. In this article I want to present seven reasons from many of them why these games are such a danger.

At the birth, a child doesn’t have the ability to discern, or as the Bible says “doesn’t discren left from right”. Parents and all those who contribute to this child’s education, work hardly to send him knowledge and abilities that will help this child make right decisions. Virtual games depart a child or an adult from reality and they are not able to judge rightly some things and to make correct decisions. I have heard cases when a child who was playing the whole day such games, ripped his younger brother, thinking that the last one will rise after this “to continue the game” as it was on the computer. The games affect not only children’s capacity to discern things, but that of adults’ too. I myself have seen such a case when I was a student. I had a classmate who was married and was 30 years old. After we had studied the whole day, our classmates were used to run in the park to rest our brains and to keep our muscles away from atrophy because we were sitting at the desks and studying the whole day. Our classmate had a bundle of diskettes with him and immediately how he found a free moment, run to play another computer game. He looked so tormented and sickly, but didn’t accept to come with us or to go for a walk at least. He preferred to sit in front of the computer and play. Sometimes he could come in pajamas to classes. Of course, this was the consequence of his pathologic dependence upon virtual games.

Once, being in Moscow, on my way to Syberia, where I was going to teach a session of inductive Bible study, I stopped to stay at a servant of a church from Moscow. In his house was a pastor who was sitting at the computer and was playing a game. I thought that the pastor, finding out that I was a servant of the Lord, would approach and would tell me about his work for the Gospel, about his family, his church. I also thought that he would be interested in me and the work I was doing. I was waiting to discuss about Jesus Christ and about the Holy Scriptures. But we didn’t have time for that. He was so concerned with his game until he finished it. Then, he drew another CD and started a new game. He was doing that for some hours, so that the host had no idea how to tell him that it was the time to leave. This man, who is called to serve through the Gospel, became the slave of the virtual games and it is not hard to realize that his family is completely neglected and his precious time, that was important to be given to the people from the church to teach and to advise them, all this time is lost for virtual games.

3.Virtual games tire out and disorientate  a person totally

Some days ago a 30 years old man from Guachjou, China, who was obsessed by virtual games, dropped dead after playing Internet games as a result of exhaustion. The victim played Internet games for three consecutive days and dropped dead in front of the computer. China, worried about the spread of pornography and politically incorrect content, has banned the opening of new cybercafes this year and issued orders limiting the time Internet users can spend playing online. How much are you controlled by virtual games? God, when he speaks in the Bible about a group of persons who think they are free, but who, in fact are slaves of impurity, says:

4.A Christian’s position doesn’t allow to be enslaved by virtual games or by other vices

When Apostle Paul wrote to the Christians from Corint, he said:

You were bought with a price; do not become slaves of men. (1 Corinthians 7:23)(NASB)

If he said this regarding to being enslaved by men, much more a Christian can not accept to become the slave of the virtual games.

5.Dependence on virtual games is a dangerous pathology (illness)

According to the statistic 1% of mature citizens of USA are sick of this pathology, and other 2–4% are nearly to be diagnosed with this illness. The same study says that 85% of Americans played at least once for money. Scholars from the University of Minessota pretend that they have discovered a medicine that can heal people of dependence on virtual games. The mechanism of this medicine consists in the stimulation of “ the pleasure center” from the human brain, that is the same thing the virtual games do. So, they want to replace an evil with another evil. I don’t even know why they call it “medicine”…

6.Dependence on virtual games belong to the desires of the flesh

Apostle Paul wrote this to the Galatians:

But I say, walk by the Spirit, and you will not carry out the desire of the flesh. For the flesh sets its desire against the Spirit, and the Spirit against the flesh; for these are in opposition to one another, so that you may not do the things that you please. But if you are led by the Spirit, you are not under the Law. Now the deeds of the flesh are evident, which are: immorality, impurity, sensuality, idolatry, sorcery, enmities, strife, jealousy, outbursts of anger, disputes, dissensions, factions, envying, drunkenness, carousing, and things like these, of which I forewarn you, just as I have forewarned you, that those who practice such things will not inherit the kingdom of God. (Galatians 5:16–21)(NASB)

7.Dependence on virtual games makes one abandon totally his responsabilities

Once, when I had a parents meeting of the children that were studing in our daughter’s class, the teacher told us that some pupils hadn’t come to school for some weeks. Their parents were wondered because their children were always telling them when they left the house they they were going to school. Then, they found out that their children were spending their time at the Internet-Cafe, abandoning totally their responsabilities from school. Do you think that only children or teenagers have such problems? I have found out about some, who call themselves Christians, but became enslaved so much of this deed of the flesh, that they don’t go to work, don’t look for a job, don’t do anything about their houses and don’t take care about those to whom they said they love them, or still say this. God says about such people:

But if anyone does not provide for his own, and especially for those of his household, he has denied the faith and is worse than an unbeliever. (1 Timothy 5:8)(NASB)

There are virtual games that have been created having the purpose to teach children or adults some things. For example, pilots, before they drive a real plane, they exercise a lot on computer and this is an interesting game. Nevertheless, most of the games used by people today are not for learning something good and almost all the cases destroy the man’s personality. What is your attitude towards virtual games? What is the place offered to virtual games in your house? Help your close one to have a correct attitude and to protect themselves of the evil that comes together with the virtual games.