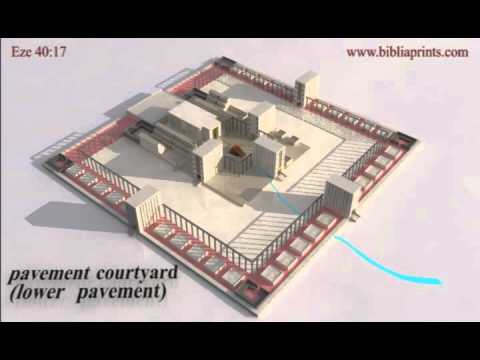 I assume that the reader who asked this question refers to the text from Ezekiel chapters 40 to 48. In these chapters Ezekiel describes a vision that he had in the 25th year of captivity (Babylon, 573 BC. H. ), 14 years after the fall of Jerusalem. In his vision, he who was in Babylon was taken by the Lord in the land of Israel and to him was shown the Temple and its surroundings, as well as dividing the country on tribes (Ezekiel 47-48), that would to be made by lot (Ezekiel 48:29). The luxury of detail with which is presented the construction of the house of the Lord, the courtyards, the gates and everything about it, proves that it is about a real construction, not a symbolic building, which means that the text must be thought and interpreted literally. Moreover, Ezekiel was told to give attention to all that God was going to show him, to make known to the house of Israel everything he would see:

So He brought me there; and behold, there was a man whose appearance was like the appearance of bronze, with a line of flax and a measuring rod in his hand; and he was standing in the gateway. The man said to me: “Son of man, see with your eyes, hear with your ears, and give attention to all that I am going to show you; for you have been brought here in order to show it to you. Declare to the house of Israel all that you see.” (Ezekiel 40:3-4)

As for you, son of man, describe the Temple to the house of Israel, that they may be ashamed of their iniquities; and let them measure the plan. If they are ashamed of all that they have done, make known to them the design of the house, its structure, its exits, its entrances, all its designs, all its statutes, and all its laws. And write it in their sight, so that they may observe its whole design and all its statutes and do them. This is the law of the house: its entire area on the top of the mountain all around shall be most holy. Behold, this is the law of the house. (Ezekiel 43:10-12)

Then they were given indications as to the worship of the house of the Lord:

When will the Third Temple operate (Ezekiel’s Temple)?

This temple will operate during the kingdom of a thousand years and not on the new earth, because according to Revelation 21:22, in the New Jerusalem from the new earth, there will be no Temple:

I saw no Temple in it, for the Lord God the Almighty and the Lamb are its Temple. (Reveleation 21:22)

An important point is that this Temple will be built before the kingdom of a thousand years, that will be instituted after the second coming of the Lord Jesus on earth. This can be understood from the fact that the Lord Jesus at His coming will come into Temple:

Remember the law of Moses My servant, even the statutes and ordinances which I commanded him in Horeb for all Israel. Behold, I am going to send you Elijah the prophet before the coming of the great and terrible day of the Lord. (Malachi 4:4-5).

At His coming the Lord will judge his people Israel and the Levites shall be purified and will bring gifts pleasing to the Lord:

“But who can endure the day of His coming? And who can stand when He appears? For He is like a refiner’s fire and like fullers’ soap. He will sit as a smelter and purifier of silver, and He will purify the sons of Levi and refine them like gold and silver, so that they may present to the Lord offerings in righteousness. Then the offering of Judah and Jerusalem will be pleasing to the Lord as in the days of old and as in former years. Then I will draw near to you for judgment; and I will be a swift witness against the sorcerers and against the adulterers and against those who swear falsely, and against those who oppress the wage earner in his wages, the widow and the orphan, and those who turn aside the alien and do not fear Me,” says the Lord of hosts. . “For I, the Lord, do not change; therefore you, O sons of Jacob, are not consumed. (Malachi 3:2-6)

Will the Christians from the Gentile need to practice and the worship according to Jewish laws?

In these chapters it is repeated that the minister at the Temple will do the Levites:

And He said to me, “Son of man, thus says the Lord God, ‘These are the statutes for the altar on the day it is built, to offer burnt offerings on it and to sprinkle blood on it. You shall give to the Levitical priests who are from the offspring of Zadok, who draw near to Me to minister to Me,’ declares the Lord God, ‘a young bull for a sin offering… (Ezekiel 43:18-19)

A very important point that should be noted is that those who will worship at the temple according to the Law will not be from the Church, because in Christ it does not matter the national origin, as the apostle Paul writes:

and the status of the Church in the kingdom of a thousand years will be different, they will be priests for God, but their function will be more administrative, they shall reign:

And they sang a new song, saying, “Worthy are You to take the book and to break its seals; for You were slain, and purchased for God with Your blood men from every tribe and tongue and people and nation. “You have made them to be a kingdom and priests to our God; and they will reign upon the earth.” (Revelation 5:9-10)

At the temple will serve and worship the Jews who will be alive at the second coming of the Lord Jesus and will turn to Jesus as a nation and will be born again, but they will not be part of the Church:

At that time the wedding will be announced already in heaven and the Bride (the Church) will follow the Lord Jesus from heaven to Earth at His second coming (Revelation 19).
The nations that will remain alive at the second coming of the Lord Jesus (not those from the Church) will not worship at the Temple according to the law, but they will have to come once a year to Jerusalem to celebrate the Feast of Booths and worship the Lord Jesus, that shall reign over all the earth, being the Lord of lords and King of kings:

The nations will come to bring gifts for the House of the Lord:

“Nations will come to your light, and kings to the brightness of your rising. Lift up your eyes round about and see; They all gather together, they come to you. Your sons will come from afar, and your daughters will be carried in the arms. Then you will see and be radiant, and your heart will thrill and rejoice; Because the abundance of the sea will be turned to you, the wealth of the nations will come to you. A multitude of camels will cover you, the young camels of Midian and Ephah; All those from Sheba will come; they will bring gold and frankincense, and will bear good news of the praises of the Lord. All the flocks of Kedar will be gathered together to you, the rams of Nebaioth will minister to you; They will go up with acceptance on My altar, and I shall glorify My glorious house. (Isaiah 60:3-9)

Conclusion: Before the kingdom of a thousand years, the Temple will be built as specified in Ezekiel chapters 40-48 and will be restored the worship at it, but the worship system will be different from the system of worship given by God through Moses out of Egypt. If the first tent of meeting and the worship system according to the Law bore the shadow of the work that Jesus would do in the future (Hebrews 10:1), then the last Temple and the worship at it will be a way of commemorating the saving work of the Lord Jesus, just as the breaking of the bread reminds the death of the Lord Jesus.