The founder and the leader of the unification church is Sun Myung Moon, born in North Korea on 6th of January in 1920. When he was 10 years old, his parent became Christians and they attended a Presbyterian Church.

When he was 16 he had a vision, while he was praying in mountains. In this vision he saw Jesus Christ who asked him to finish the work he (Jesus) could not finish. Jesus tald him that nobody exept him is able to do this work. After Jesus Christ told him this several times, Moon accepted this proposal. His teaching spread out to the east, especially in South Korea. In 1971 he moved to America. 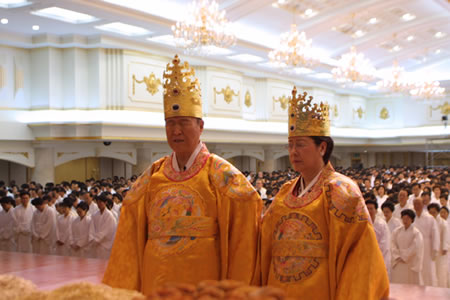 Sun Myung Moon declared himself as the Mesiah of our time. He declared that the second coming of Christ wouldl be between 1917 and 1930. His birth enroll very well in this period.

Here is a declaration made at a conference organization, by the Unification Church from San-Francisco, California.

“The world have to find the “true parent”, to release itself from the influence of Satan. And this person will be Messiah”- declared he, ”and this is what God called me to… to have the heart of the “true father”, full of love for all the races, people of all the colors, and from all around the world”

Here is a statement made of the followers of Moon:

The Reverend Moon is the Messiah, the Lord of the second coming… If people would realize their state of sin, they would acknowlege that the Father is the Messiah… This was revealed to us by Reverendum Moon. The man who can realize this thing is without sin. Such a man can be qualified as a Messiah. (Dr. Sudo, “220-day Training Manual”. Unification Church, 1975 P.160,222,400).

Although the doctrines of Moon counteracted with Christianism, he says that all this was revealed to him by Jesus Christ:

May be you would like to ask me again” What authority is behind all thungs I do?” I have talked to Jesus in the spiritual world. I have also talked to John the Baptist. This is the origin of my authority. If you still can not understand that my words are true, than may be sometime later you will understand that these hidden truths are true, but only seem new to you. You heard that I have spoken from the Bible. If yu believe the Bible, than you must believe what I tell you. (Rev.Moon, “Christianity in Crisis”, p.98)

Here is another statement of Moon:

We are the disciples who understand the heart of Jesus and His hope correctly. (Rev. Moon, : The way of the World”,p.20)

This movement has about two million followers. They are sure Moon is the Messiah. They address and close their prayers in the name of the “true parents” and believe in his spiritual essence.

The information above I have taken from the book “The Deceivers” Josh McDowell and Don Stewart.

Now let’s see how this information fits with the Scripture.

Moon says that the teaching he has, has received from Jesus in a vision. There are many cases in the Bible when God speaks to people through visions. Yet, the Bible clearly states cases where the visions are not from Him. (Deuteronomy 13: 1-4). Here is the advise which St. John gives us in his epistle:

Beloved, do not believe every spirit, but test the spirits to see whether they are from God, because many false prophets have gone out into the world. By this you know the Spirit of God: every spirit that confesses that Jesus Christ has come in the flesh is from God; and every spirit that does not cenfess Jesus is not from God; this is the antichrist, of which you have heard that it is coming, and it is already in the world. You are from God, little children, and have overcome them; because greater is He who is in you than he who is in the world. They are from the world; therefore they speak as from the world, and the world listens to them. (1 John 4: 1-5)

So, when we have a dream or a vision, or when somebody speaks to us, and all the information must be checked with the Scriptures, and only receive it if it does not contradict with the Word of God.