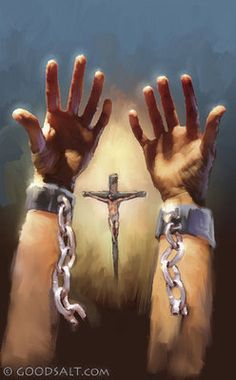 When I came to Novokuznetsk, I heard amazing things about the rehabilition center of the drug addict “The Spring of Life” and I wanted so much to go and see that center. In this article I want to share the things that I saw and that impressed me deeply till the tears came.

When it was the day and the time to go and see the centre, I had just finished to teach the computer lesson and then I started a short discussion with the pastor of the church. When I went out to go, I was impressed to see many people that were standing at the door and were waiting for the beggining of a planning meeting. I was told that almost all men that were standing at the door were former drug addicts who had passed the rehabilition at that system of centers and then, they were responsible of different ministries and teachers at the centre. Two of them, Serghei and Dima greeted me warmly and they told me that they came to take me to their center and I went with them.

Being very curious, I began immediately to ask them a lot of questions about thier life and how they had been set free from the drugs’ slavery.

Dima is 34 years old and he started to drug himself since he was 27. He became very sick and desperate. His mother found out from the mother of another drug adict about the rehabilition center from Kuzideevo and advised Dima to go there too, maybe that would help him. Until that, he went to the hospital, they spent much money there, but he couldn’t abstain more than two-three days after coming from the hospital and he re-started to drug himself. When he went to Kuzideevo, he signed an engagement to stay there for three months and his parents paid for his being there. Besides the discipline that was asked there, they were daily studing the Bible and then they had a care to do the whole work of the household. There were 15 patients and 3 instructors who had been drug addicts before, but had passed that program and had been set free. Dima said that the most hardly was to be set free from the psychological dependence of drugs and the Bible study has the decisive role of doing that. There he had as the instructor Serghei Klimenko, who was driving the car. Now, Dima is an instructor at the Kaltan centre too and he is very fulfilled of this serving. He hopes to marry, to found a family and to have children. Also from Dima I found out that the center from Kaltan is the biggest, where the drug addicts come after they got treatment from toxic effects of  the drugs in other 5 rehabilition center, where they stay for 3 months. In the process of this treatment of toxins thay don’t use any medicine, they only study the Bible, work together and pray.

Seghei Klimenko, who was Dima’s insructor and who drove the car, hears badly, because of a superdose he had once used. Serghei is 47 years old and he has used drugs for 18 years. When he was in a dead faint in the hospital for a long time, one of his friends, a former drug addict, came and took him out of there and brought him to the centre from Kuzideevo. By the prayers of all those who were there, he recovered his senses, but still he was very weak and his feet were swollen. After some more time, his feet began to recover again. All that time, he listened to the Word of God and he began to study the Bible by himself. When Sergei was retelling me that, he had tears in his eyes on all our way to the centre and he kept telling me how grateful he was to God for the life that He had given to him. He said me so: “Vasile, I can’t express to you how much I rejoice for every day that comes. In the morning I get up and I rejoice a lot of that day, of the health that I have, of my saved life and that I can, even a little, be useful to others. After I had been in such a hell, God saved me.”

When we arrived at the centre from Kaltan, I was met very warmly by all those who were there. Brothers had already layed the table with tasty Russians pelmeni that all of them prepare there and sell to the people from the church and in the shops from the city. After we had had the meal, I went to the section where the pelmeni were prepared, then they showed me the carpentry workroom and where they do metallic fence and in this way, they can cover all the spendings for the center and little by little they start to repair the building, that was a shaping department of a factory before.

The most interesting thing I have found was the section of treatment from toxic effects that was on the whole territory of the rehabilition centre. I came to a two floor building that had bars at each window and the doors were locked with a podlock. A vigorous man opened the door and he pesented himself as an instructor there. When I came in I saw very many men of different ages. The eldest was 34 years old and the youngest 16. All of them asked to be in those conditions, to assure themselves that they would not run away and would not give up when the desire to use drugs would torture them. There was a big hall with tables in the middle of the building and there, some were studing the Bible, others were writing letters, others were singing and others were listening to. Not far away I saw a closed room with a door of bars and there were four young men. When I asked why they were there, I was told that they would be there until they would be able to register to the rest of the programme and I didn’t ask other questions on that topic. I asked all those who were in the hall to tell me a cause that they consider important that made them use drugs. I was surprised that they said that had done that, because that hadn’t had any occupation and others said that they had done that because they hadn’t been limited materially by anything, they had had all they wanted and their parents hadn’t limit them of anything. I also asked who of them had been to a hospital to be healed. All of them had passed expensive programmes through different hospitals, but they hadn’t been healed. But here, every 1 of 2 that come to be rehabilited, never goes back to drugs, but remain to follow the Lord Jesus. This is the power of God’s Holy Spirit that they have received at repentance.

I also asked those men who were passing through rehabilition in the closed area, what  should we do, what should the government do to stop the spread of that great evil – the drugs? They said that it was important to talk as much as possible in mass-media about the consequences that drugs lead to and to teach about those consequences in schools. Then, one of them said that all those things were done and had been done before and he added:“The Bible must be taught in mass-media, in schools, etc, because only through the message of the Bible and by faith in Jesus Christ we could be set free of the drugs’ slavery”.

May God  help us to bring His Word to all people, in mass-media, in schools, etc. and to stop the young men and teenagers from the pestilence of our age.