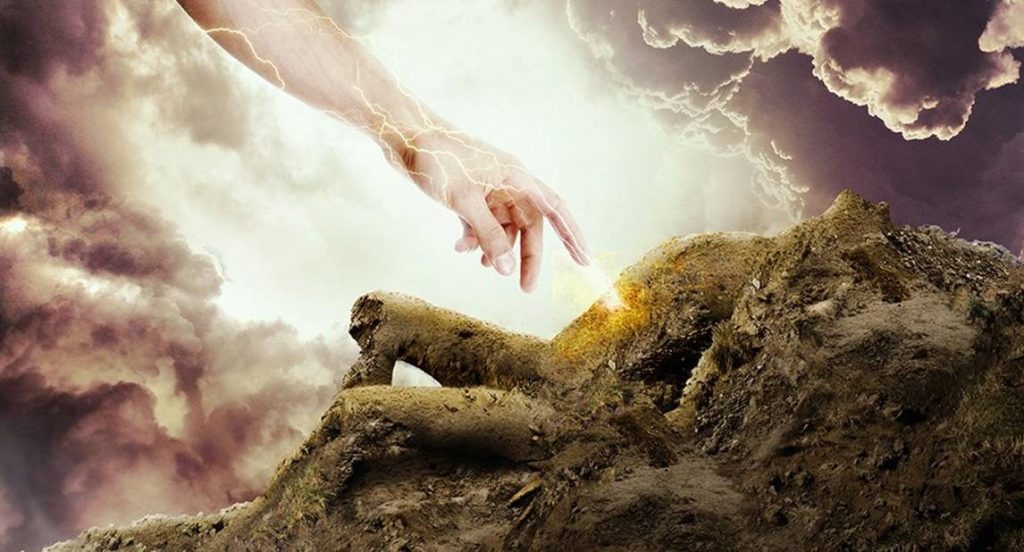 It seems that this question has roused much discussion over the centuries and today people also insist to know the answer and turn to philosophical reasonings. If we want answers about the nature of God, we must turn to His Word, that is written in the Bible and where God does not tell us more, let us not get over what is written.

We do not find this expression in the Bible. I suppose that those who have concluded thus refer to the words of the Lord Jesus when He was speaking with the Samaritan woman and said to her:

God is spirit, and those who worship Him must worship in spirit and truth. (John 4:24)(NASB)

But this profound truth does not exclude another one as important as this one given in the same Gospel of John that begins with this description of the Lord Jesus:

Who created man? Who created you? God created man and all other things through Jesus Christ. The Savior is called here the Word that was in the beginning, that was with God, that was God and that is the Creator, because all things came into being through Him, without exception.

Then, it is written about this Word, which is God:

And the Word became flesh, and dwelt among us, and we saw His glory, glory as of the only begotten from the Father, full of grace and truth. John testified about Him and cried out, saying, “This was He of whom I said, ‘He who comes after me has a higher rank than I, for He existed before me.’” For of His fullness we have all received, and grace upon grace. For the Law was given through Moses; grace and truth were realized through Jesus Christ. (John 1:14-17)(NASB)

So, according to these verses we can not say that God is acorporal, because He was made flesh in the person of Lord Jesus and dwelt among us full of grace and truth.

In Him all the fullness of Deity dwells in bodily form

When Christians from the city of Colosse became concerned too much about philosophy and began questioning the nature of Lord Jesus, the Apostle Paul wrote:

See to it that no one takes you captive through philosophy and empty deception, according to the tradition of men, according to the elementary principles of the world, rather than according to Christ. For in Him all the fullness of Deity dwells in bodily form. (Colossians 2:8-9)(NASB)

So, in Christ Jesus dwells in bodily form all the fullness of God.

What does it mean ”in the image and likeness of God”?

In the first chapter of the Book of Genesis it is written:

Then God said, “Let Us make man in Our image, according to Our likeness; and let them rule over the fish of the sea and over the birds of the sky and over the cattle and over all the earth, and over every creeping thing that creeps on the earth.” God created man in His own image, in the image of God He created him; male and female He created them. (Genesis 1:26-27)(NASB)

When referring to the value of human life, God refers to the fact that a man has His own image:

Whoever sheds man’s blood, by man his blood shall be shed, for in the image of God He made man. (Genesis 9:6)()NASB)

The passage from the Epistle to Ephesians tells us that the phrase “image of God” refers primarily to the spiritual aspect of man:

But you did not learn Christ in this way, if indeed you have heard Him and have been taught in Him, just as truth is in Jesus, that, in reference to your former manner of life, you lay aside the old self, which is being corrupted in accordance with the lusts of deceit, and that you be renewed in the spirit of your mind, and put on the new self, which in the likeness of God has been created in righteousness and holiness of the truth. (Ephesians 4:20-24)(NASB)

God help us to live well every day and through a holy and righteous life, lived according to the truth of the Holy Scriptures, to reflect the image of the One according to whose likeness we were created.