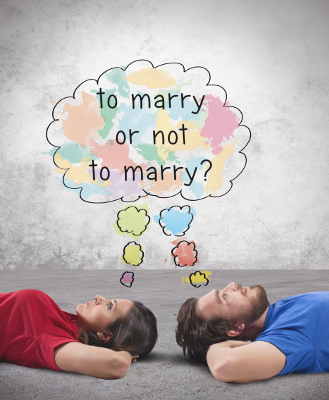 When talking about being or not being married, Apostle Paul said: “Yet I wish that all men were even as I myself am however, each man has his own gift from God, one in this manner, and another in that. ” (1 Corinthians 7:7) So, being married is a gift and not being married is not a disaster, but also a gift. Paul was unmarried. How can you know what is your gift or your calling: to marry or to remain unmarried? In this article we will see the answer that God gives to us. Exteriorly, it seems that Paul is against marriage and wants to advice the readers to remain unmarried. The author tells us that he says this for their own benefit; not to put a restraint upon them. At the beginning he presents some realities about marriage and then situations when one has to marry and situations when marriage doesn’t have to take place.

1. The realities about marriage that have to be consulted are the next:

2. You have to marry if you are under a permanent desire to marry

The Word of God says:

But if any man thinks that he is acting unbecomingly toward his virgin daughter, if she is past her youth, and if it must be so, let him do what he wishes, he does not sin; let her marry. (1 Corinthians 7:36)

Above, I have explained what is this need and if you are under the pressure of this desire, choose to marry, but how I have said, not only for this reason or according this standard. Learn to control yourself. This will help you a lot and will male you be constant and happy in life. You may tell me that I contradict myself or the Bible contradicts itself. No way! More than this, the Scripture says:

Why so? Because God is the One who brings the wife to the one who will be her husband and God does this through love that He puts in both hearts, that of the man and that of the woman. This love draws them one to the other to marry. The same apostle Paul who speaks here about marriage, and it seems, exteriorly, that he tries to convince the readers not to marry, he says in the first Epistle to Timothy this:

A widow is to be put on the list only if she is not less than sixty years old, having been the wife of one man, having a reputation for good works; and if she has brought up children, if she has shown hospitality to strangers, if she has washed the saints’ feet, if she has assisted those in distress, and if she has devoted herself to every good work. But refuse to put younger widows on the list, for when they feel sensual desires in disregard of Christ, they want to get married, thus incurring condemnation, because they have set aside their previous pledge. At the same time they also learn to be idle, as they go around from house to house; and not merely idle, but also gossips and busybodies, talking about things not proper to mention. Therefore, I want younger widows to get married, bear children, keep house, and give the enemy no occasion for reproach; for some have already turned aside to follow Satan. (1 Timothy 5:9–15)

According to the covenant that we made with Jesus Christ, we, Christians, have to take care for each other, That’s why, in the primary church there was a list of widows for the support of the church. Apostle Paul writes that on that list should be included only over 60 years old women, who couldn’t afford their personal needs, but who took care of their own needs and of the needs of others in their life. But there were also young widows, who, wishing to be supported by the church, were asking to be included on those lists. Paul says to Timothy not to accept them for two reasons: because if they were material supported by the church, they would learn to be idle, and go around from house to house, the second reason is their pressure of sexual desire that can make them “turn and follow Satan”. That’s why Paul says that for these women it is better to marry, to have children and to be housewives.

3. You don’t have to marry if you have the whole liberty to be unmarried and not to be under any pressure

But he who stands firm in his heart, being under no constraint, but has authority over his own will, and has decided this in his own heart, to keep his own virgin daughter, he will do well. (1 Corinthians 7:37)

May God help us to live for Him and to serve Him with all our consecration, no matter what is our marital condition and to have this fulfillment in our hearts either being married or unmarried. May the spring of our fulfillment be God.