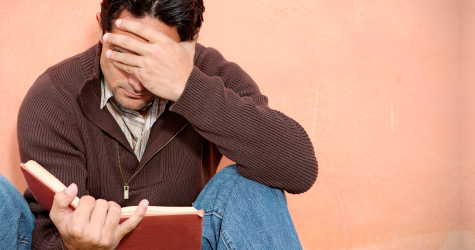 He who understands what sexual immorality is and the grave consequences the dissoluteness brings out, will ask himself what he should do to protect himself of the pressure of the sexual immorality that is around. Magazines, radio and TV programmes, Internet, all of them “invite you” to “taste” the dissoluteness, but they don’t tell you about the grave consequences that will destroy your life. What should you do to resist against these pressures and to live a life of victory against the sin and the sexual immorality?

Trough studying the Bible, God forms a correct thinking and strong beliefs to you that will protect you against the immorality that is imposed to you in a subtile way for many times. Knowing God’s will, it give you power of discernment and you will quickly grasp the dangers that can attract you into immorality and you will be protected against them. Here is what the Bible says in regarding to the importance of studying the Bible.

My son, give attention to my wisdom, icline your ear to my understanding; that you may observe discretion and your lips may reserve knowledge. For the lips of an adulteress drip honey and smoother than oil is her speech; but in the end she is bitter as wormwood, sharp as a two-edged sword. (Proverbs of Solomon 5:1–4)(NASB)

The king David wrote in a psalm, the psalms are holy songs:

How can a young man keep his way pure? By keeping it according to Your word. (Psalm 119:9)(NASB)

As the body needs physical trainings to have a good state and physical resistance, in the same way, our soul needs to study the Word of God, that makes it strong and resistent against the bad pressures of this world. How much time do you spend studying the Bible? What have you studied today? What did you study the last week?

2. Keep you away from any trap of immorality

Now then, my sons, listen to me and do not depart from the words of my mouth. Keep your way far from her (the immoral woman)and do not go near the door of her house…(Proverbs of Solomon 5:7–8)(NASB)

I want to draw the attention that the author doesn’t say “keep you far from her”, but “keep your way far from her and do not go near the door of her house.” There are some things that finally lead you to immorality. These can be some friends that accept immorality in their life and so, with them you will awake one day too close to imorality and under a pressure against which you will not be able to resist. The way that leads to the immoral person are some pages on Internet, magazines, movies on TV. For example, somebody told me today that last week it was shown a movie on The Television of Moldova, called “Tabu”, which subject’s is a young woman that insists to seduce her step-father during the whole movie, and finally she gets it. Of course, the producer shot the movie in such a way that everyone whould unconsciously sided the immoral girl because she was “very enloved” and that “that was the true love”. But in this way, it is implanetd in each specator’s thinking that incest (sexual relation between relatives) is something normal and acceptable. So, in a subtile and malicious way, the immorals attract others in disoluteness. That’s why, when you watch such movies, you have to do something, to write to the Parliament, to the President, to the Television, etc. and don’t be indifferent. All these movies destroy our families, children and country if we don’t do anything in regards to this. What are the agents of immorality that entered or try to enter in your life? What do you do to stop their influence? What are you going to do from now on?

3. Listen to the advice and the reproof of your teachers

There will always be people who will try to stop you from immorality. Listen to these people. At the same time, be a person who advises others to stop from immorality. I remember how once, when I was in the airport from Budapest, there were two Britain soldiers sitting at the same table with me. Each of them took a magazine with pronography and they started to look through it while I was studying the Holy Scriptures. Firstly I asked them who they were, where they came from, and I found out that they came from Macedonia, where they had been a part of the pacifying forces. Then, I told to those woung men that the magazines they are looking trough are very bad and they will affect their lives awfully in the future. They listened attentivelly to all that I was telling them and they told me that it was for the first time in their lives when they heard something similar, because no one had ever told them those things in regarding to those magazines. That’s why, speak always to the people, but do it wisely and delicately. And others if they they don’t listen to, they will also say once the way the Bible writes:

And you say, “How I have hated instruction! And my heart spurned reproof! I have not listened to the voice of my teachers, nor inclined my ear to my instructors! I was almost in utter ruin in the midst of the assembly and congregation.” (Proverbs of Solomon 5:12–14)(NASB)

4. Build up a family and rejoice in your husband or wife

God created the physical union to be a joy and the culmination of expressing the conjugal love. That’s why, you have to prepare to build up a family and in the family rejoice always in your husband or wife and offer joy, as the Scriptures says:

Drink water from your own cistern and fresh water from your own well. Should your springs be dispersed abroad, streams of water in the streets? Let them be yours alone and not for strangers with you. Let your fountain be blessed, and rejoice in the wife of your youth. As a loving hind and a graceful doe, let her breasts satisfy you at all times; be exhilarated always with her love. (Proverbs of Solomon 5:15–19)(NASB)

The one who doesn’t learn the abstinence will never be able to rejoice of the sexual relation with the partner of marriage. And then, in marriage there are some periods when the spouses have to abstain from the sexual relations. Abstinence is a thing that is learnt and that has to be learnt. Don’t be deceived by those who say that “the sex’ need is similar to that of food or air”. They are not right and they deceive themselves gravely, walking in sin and unlawfulness. But…

His own iniquities will capture the wicked, and he will be held with the cords of his sin. He will die for lack of instruction, and in the greatness of his folly he will go astray. (Proverbs of Solomon 5:22–23)(NASB)

Protect yourself against the pressure of immorality that is around you! Do your utmost.

Tomorrow I will publish an article where I will touch the subject about prayers for the dead. What does the Bible tell in regards to this?