Jesus taught Nicodemus that the new birth is the basic condition for entrance into the kingdom of heaven and a spiritual experience that manifests itself by transforming human life. After this, Nicodemus, who was a religious man with great influence in his time, wanted to make this experience in his life and asked Jesus:

To the question of Nicodemus: “How can these things be”, Jesus replied: 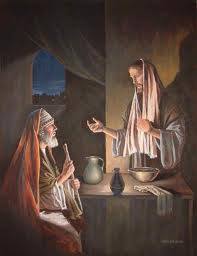 Are you the teacher of Israel and do not understand these things? Truly, truly, I say to you, we speak of what we know and testify of what we have seen, and you do not accept our testimony.

When he said “we speak “Jesus referred to Himself, His disciples and the people testifying about Him. Nicodemus was in the party of the Pharisees and therefore, Lord Jesus addressed him as a representative of the party when He said: ”You do not accept our testimony.” There is a class of arrogant people who are fully convinced of their concepts and disregard any evidence, any testimony and their minds do not seek the truth, but “arguments” and speculation to attack the truth. Next, all Jesus told Nicodemus refers to the whole party of Pharisees:

If I told you earthly things and you do not believe, how will you believe if I tell you heavenly things?

no one has ascended into heaven, but He who descended from heaven: the Son of Man. (John 3:13)

2. Believe in the Lord Jesus Christ

To explain the importance of faith for the new birth, Jesus turned to the events from the history of Israel well known by Nicodemus and said:

As Moses lifted up the serpent in the wilderness, even so must the Son of Man be lifted up; so that whoever believes will in Him have eternal life. (John 3:14-15)

The case of the serpent lifted up by Moses in the desert is recounted in the book of Numbers. When they were avoiding Edom, the people lost patience on the road and spoke against God and against Moses:

“Why have you brought us up out of Egypt to die in the wilderness? For there is no food and no water, and we loathe this miserable food.” The LORD sent fiery serpents among the people and they bit the people, so that many people of Israel died. So the people came to Moses and said, “We have sinned, because we have spoken against the LORD and you; intercede with the LORD, that He may remove the serpents from us.” And Moses interceded for the people. Then the LORD said to Moses, “Make a fiery serpent, and set it on a standard; and it shall come about, that everyone who is bitten, when he looks at it, he will live.” And Moses made a bronze serpent and set it on the standard; and it came about, that if a serpent bit any man, when he looked to the bronze serpent, he lived. (Numbers 21:4-9)

The Bible researchers assume that at that time, people of Israel who were in the wilderness, counted over 2.5 million of men with their wives and children. The camp was arranged in an order established by God, with the meeting tent in the center of the camp. The standard and the bronze serpent were in the centre of the camp, and it could be seen only by those who were in its immediate vicinity. And if it happened that someone from one end of the camp was bitten by a fiery snake, if he did not know what the solution was, he was urged by people to run fast, until the poison affected him, that he might manage to see the bronze serpent set on the standard and be healed. Those who believed ran, saw the bronze serpent and were healed. Others, who were “more practical and realistic” would have said: “This is a childish game … How can that help if I see a hanging bronze snake? If it were a drug, I would believe, but it can not be so simply…” God wants to be trusted on the Word and He is the same yesterday, today and forever and He does the same miracles. So, for a man be born again, he must believe wholeheartedly in Jesus Christ:

Faith brings new birth and the greatest gift that a man can receive – eternal life. Unbelief in the Lord Jesus Christ is the greatest crime a man can commit against his own soul. Pay attention to the tense of the verb and why unbelievers are judged when He says:

But who does not believe has been judged already, because he has not believed in the name of the only begotten Son of God.

If one fulfills this condition for the new birth, the next one will be very easy to perform and it is…

In the context of this passage, to come to the Light means to move on the side of the Lord Jesus Christ and live in obedience to Him, in the light, working in truth and doing what is right. There are many people who claim to have faith that Jesus Christ wishes for the salvation of their souls, but continue to live in darkness, doing evil deeds, hating the truth and the holy life. The new birth takes place when someone takes a final decision not to live in sin and darkness, but in light and truth. Take this decision in your heart, to experience the new birth. In the following articles I intend to present what happens in the inner world of a man at his new birth and how the life of a born again person looks like.

In conclusion I urge you to receive the Christian testimony and the Word of God, to believe wholeheartedly in the Lord Jesus Christ and to come to light as to live well. God bless you and give you a new life!