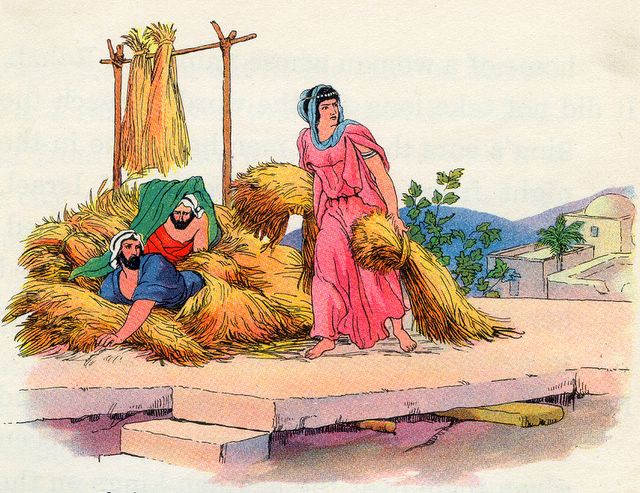 We live difficult times of moral decline, when a great number of women and girls became prostitutes. Once, I and my friend, Ion Cheptene, were back from Egypt, after we together with our teachers, Mia and Costel Oglice had had an inductive Bible study conference for the church ministers from that country. When we got on the airplane, that flew from Lamaka (Cyprus) to Chisinau, we noticed that almost all passengers were prostitutes that were coming home for a while. How did we find out? They themselves kept looking at us, and then they came closer and tried to make the arrangements to offer their “services” when we landed. There was a fool man by my side who made the arrangements with one of them to use her “services”  when we landed. All those things were so disgusting, but we thought that God wanted us to be in the same plane with those women to tell them about the salvation they could have, if they believed in the Lord Jesus. When we started talking to them, all other women approached us and some of them were crying when we were telling them about God’s perspective for their lives and how He could repair their lives, the same way he had done with Rahab.

The second chapter of the book of Joshua begins in this way:

Then Joshua the son of Nun sent two men as spies secretly from hittim, saying, “Go, view the land, especially Jericho ” So they went and came into the house of a harlot whose name was Rahab, and lodged there. (Joshua 2:1–2)(NASB)

Nowadays, hotels are the places where prostitutes come to look for potential clients, at that time, prostitutes offered their houses as hotels. The spies from Israel chose to stop at Rahab’s house, because it was the only option to find a hotel. We do not know how Rahab became a prostitute, but it is easy to notice that she was a victim of immorality that was spread in her nation, and we will see this from her later actions. In the 18th chapter of the book of Leviticus, God enumerates the sexual perversions that were not to be practiced by the people of God and then He says that these practices are very spread among the nations that had to be sent away from the land Canaan, and because of these perverse sexual practices, he says:

Here is why Rahab became a prostitute. Immorality was accepted as a normal thing in the context she lived. How has the immorality of the world we live in affected you? Maybe you are a victim of immorality, as Rahab became?

Those two spies were from the people of God and they stayed in Rahab’s house. Here is how she used this unique possibility to save her own life and the life or her relatives:

It was told the king of Jericho, saying, “Behold, men from the sons of Israel have come here tonight to search out the land.” And the king of Jericho sent word to Rahab, saying, “Bring out the men who have come to you, who have entered your house, for they have come to search out all the land.” But the woman had taken the two men and hidden them, and she said, “Yes, the men came to me, but I did not know where they were from. It came about when it was time to shut the gate at dark, that the men went out; I do not know where the men went. Pursue them quickly, for you will overtake them.” But she had brought them up to the roof and hidden them in the stalks of flax which she had laid in order on the roof. So the men pursued them on the road to the Jordan to the fords; and as soon as those who were pursuing them had gone out, they shut the gate. Now before they lay down, she came up to them on the roof, and said to the men, “I know that the LORD has given you the land, and that the terror of you has fallen on us, and that all the inhabitants of the land have melted away before you. ”For we have heard how the LORD dried up the water of the Red Sea before you when you came out of Egypt, and what you did to the two kings of the Amorites who were beyond the Jordan, to Sihon and Og, whom you utterly destroyed. When we heard it, our hearts melted and no courage remained in any man any longer because of you; for the LORD your God, He is God in heaven above and on earth beneath. Now therefore, please swear to me by the LORD, since I have dealt kindly with you, that you also will deal kindly with my father’s household, and give me a pledge of truth, and spare my father and my mother and my brothers and my sisters, with all who belong to them, and deliver our lives from death.” So the men said to her, “Our life for yours if you do not tell this business of ours; and it shall come about when the LORD gives us the land that we will deal kindly and faithfully with you.” Then she let them down by a rope through the window, for her house was on the city wall, so that she was living on the wall. (Joshua 2:2–15)(NASB)

She was a prostitute, but she became a part of God’s people

When the people of Israel destroyed Jericho…

Joshua said to the two men who had spied out the land, “Go into the harlot’s house and bring the woman and all she has out of there, as you have sworn to her.” So the young men who were spies went in and brought out Rahab and her father and her mother and her brothers and all she had; they also brought out all her relatives and placed them outside the camp of Israel. They burned the city with fire, and all that was in it. Only the silver and gold, and articles of bronze and iron, they put into the treasury of the house of the LORD. However, Rahab the harlot and her father’s household and all she had, Joshua spared; and she has lived in the midst of Israel to this day, for she hid the messengers whom Joshua sent to spy out Jericho. (Joshua 6:22–25)(NASB)

Rahab saved her own life and the lives of her relatives by faith and courage. Now, they, her relatives were “outside the camp”, that means they received the freedom to go wherever they wanted, but Rahab was accepted to live with the people of God and the action of her faith was honored very much in the midst of Israel.

God built up a house for Rahab

When the Gospel of Matthew names the genealogy of the Lord Jesus, it says:

Salmon was the father of Boaz by Rahab. (The Gospel of Matthew 1:5)(NASB)

Maybe you live an immoral life now, maybe you are a prostitute, or maybe you do not sell yourself for money, but you live today with one, tomorrow with another one. Or, maybe even worse, you live with someone in adultery, and you console yourself that this is not bad, because “everyone around is doing this”. Or maybe you are a lesbian, or a homosexual. Don’t deceive yourself. God is the same yesterday, today and forever. He doesn’t change and He doesn’t change His moral standards either, that He let for us, people, the creation of His hands. Turn to God with all your heart. He will forgive you, He will set you free from the slavery of the immorality you live in and He will make you a new living. He will give you a future and a hope. He can build up a family that will bring you joy and fulfillment. Go to God with all your heart by faith in the Lord Jesus Christ. Follow Rahab’s example.