Will part of the Christians live in Heaven and another part of them live on the new Earth?

The correct answer would be that all believers will live in Heaven for awhile and then all of them will live on the new Earth. 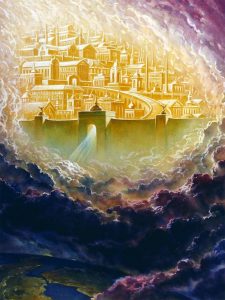 When the time of the Gentiles will come to its end, the Church will be taken to heaven for the period when God will judge the inhabitants of the Earth for all the evil they will have done and will punish Israeli people as well for their iniquity (the seventieth week of Daniel, Daniel 9:24-27). At the end of the Great Tribulation, Lord Jesus will come back on Earth with His Church and will reign on this Earth 1000 years together with the Church and the conquerors of the beast (Revelation 20:1-6). At the end of the Thousand Year Reign of Christ, will be the final judgement when the present heavens and the Earth will perish:

Then I saw a large, white throne and the one who was sitting on it. The earth and the heavens fled from his presence, and no place was found for them. (Revelation 20:11)

The Bible does not tell us where the Church will be during the period of the final judgement, but it does tell us that we, the Church, will judge the world which means that we will be in heaven with God during those times:

You know that the saints will rule the world, don’t you? (1 Corinthians 6:2a)

This is also confirmed by the book of Revelation which says that after the final judgement the Church will descend from heaven, from God to the New Earth.

Then I saw a new heaven and a new earth, because the first heaven and the first earth had disappeared, and the sea was gone. I also saw the holy city, New Jerusalem, coming down from God out of heaven, prepared like a bride adorned for her husband. I heard a loud voice from the throne say, “See, the tent of God is among humans! He will make his home with them, and they will be his people. God himself will be with them, and he will be their God. He will wipe every tear from their eyes. There won’t be death anymore. There won’t be any grief, crying, or pain, because the first things have disappeared.” (Revelation 21:1-4)

The proof that the New Jerusalem is the Church, the Bride of the Lamb, is found in the following verses:

Then one of the seven angels who had the seven bowls full of the seven last plagues came to me and said, “Come! I will show you the bride, the wife of the lamb.” He carried me away in the Spirit to a large, high mountain and showed me the holy city, Jerusalem, coming down from God out of heaven. The glory of God was its radiance, and its light was like a valuable gem, like jasper, as clear as crystal. (Revelation 21:9-11)

There will no longer be any curse. The throne of God and the lamb will be in the city. His servants will worship him and see his face, and his name will be on their foreheads. There will be no more night, and they will not need any light from lamps or the sun because the Lord God will shine on them. They will rule forever and ever. (Revelation 22:3-5)

I recommend you to study the Inductive Bible study course in four parts “Revelation I, II, III, IV” for a complete understanding of these events. The word “revelation” from Greek is “Αποκάλυψις” and means “unveiling of something to make it visible to all, disclosure”.  The purpose of the Book of Revelation is “to show his servants the things that must happen soon” (Revelation 1:1). Thus this book was given to disclose us the things to come and not to entangle us. And we have the promise of Lord Jesus that the Holy Spirit will reveal us the things to happen:

Yet when the Spirit of Truth comes, he’ll guide you into all truth. He won’t speak on his own accord, but he’ll speak whatever he hears and will declare to you the things that are to come. (John 16:13)

The question is: do we believe these words of Lord Jesus? Do you know that our responsibility as believers is to study and understand what is written in this book? John writes:

How blessed is the one who reads aloud and those who hear the words of this prophecy and obey what is written in it, for the time is near! (Revelation 1:3)

Who can obey something he cannot understand? Do you know the warning that we find at the end of this book? I think you know it well, but how aware are you of your responsibility? Read these verses again and think about their meaning:

If anyone takes away any words from the book of this prophecy, God will take away his portion of the tree of life and the holy city that are described in this book. The one who is testifying to these things says, “Yes, I am coming soon!” Amen! Come, Lord Jesus! (Revelation 22:19-20)

Have you ever thought that by simply not telling other people about these truths, you take away a part of Lord Jesus’ message, and God will take away your portion of the tree of life, which means you will have no eternal life and your part of the holy city, meaning you will not be part of His Church? Can you obey the things you cannot understand? If you say you are a believer, it’s your responsibility to study the book of Revelation! If you say it is impossible, you’re making Lord Jesus a liar  because He promised to send us the Holy Spirit to lead us in all the truth. The book of Revelation is “the revelation” He received  from the Father to let us know the things that are to come soon!

I urge you, dear friend, to begin studying the Bible and especially the book of Revelation and pray to God that He will guide you through His Holy Spirit and will enlighten you to understand His word and be happy by obeying it and teaching others to do the same: