I never thought that I would be a witness, everyday, of genocide in our country; no, I’m not exaggerating in any way. Obviously, we do not see the crimes caused by military conflict, which is good; but we have come to a time when the lack of discernment causes another kind of genocide, with far greater effects. We are trembling when we see children who die in military conflicts in Syria or Iraq, but we do not care when abortion has become an unpunished crime in peacetime. We are ready to do anything to bring murderers and criminals to justice, but when it comes to abortion, we use words like women’s rights or tolerance. No, we are not any better when we are not truthful in calling it by its name; and those who encourage abortion, those who abort or who, moreover, promote in vitro fertilization, will not be stopped. Officially in our country, only 100,000 families cannot have children. Obviously, the causes are multiple and vary, and  each one must be approached individually; but according to research, one of the most widespread causes of infertility is sexual immorality. Moreover, once the state introduced subjects such as “Life Skills” to schools, it only helped promote and encourage young people into illicit sexual relations. If one of the causes of infertility is alcohol, smoking and other harmful activities, I wonder why the state is encouraging holidays like wine and advertising about how great it is to smoke? All these collaborated together, create the cause for infertility that exists today. Would it not be better to encourage and promote a healthy way of life and sexual abstinence until marriage in schools, rather than creating a lottery from our money? That is how in vitro fertilization is characterized, because the rate of getting pregnant is only 25 percent. It is a real drama when you are one of those who think that this method is against God and His plan to create children; and then, you ask the question, how many children are killed for one to live? Obviously you will tell me that they are a happy family that finally can have a child after using this method of conception. But let’s not forget how many mistakes have been made to get you pregnant. And then, I said that only 25 percent of women who resort to such methods of having children become pregnant. The question is what about the 75 percent of the women? 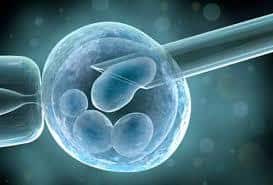 Now, the Republic of Moldova is among the countries that will methodically kill children. In addition to encouraging abortion, killing hundreds of thousands of children annually, in vitro fertilization will now be added to these crimes. Another study made by an in vitro fertilizer promoter Andre van Steirtehgem acknowledged that children conceived in vitro will have high fertility problems; but I do not know how much of this is talked about…

May God have mercy on our country, and give the authorities a lot of discernment to distinguish the evil from good, and the, apparently good intentions they have, to use to encourage God’s plan to have children and not the human plan. We see that, many times, the human plan is flawed and bears negative consequences for the whole country.