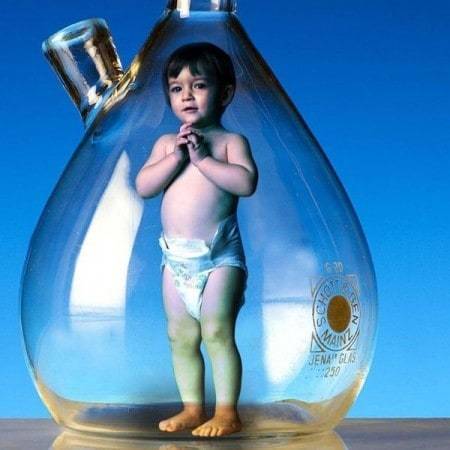 is a process by which egg cells are fertilized by sperm outside the womb, and it is a major treatment in infertility. The term in vitro, in Latin means within the glass, and it refers to the test tubes where the woman’s ova are fertilized. The first time doctors used this method in England in 1978. Thus, by laparoscopy, the woman’s ovule prevails. Sperm is obtained from the man, but in many cases, from the containers with sperm, where man’s seed is kept frozen. Doctors create an environment, called “culture medium” and there they cause the fertilization of the egg by the spermatozoon. Human zygote is kept for germination and after insemination, from 36 to 56 hours, it will be transferred into the woman’s uterus, expecting that it will survive. What does the Bible say about this practice? Directly – nothing, because no one has used such a method during those times when the revelation of God was recorded. But the Bible addresses the subject of the human life’s value very much and, looking at all that the Scripture says, we can draw clear conclusions regarding ”In Vitro” fertilization.

During 1998-1999, just these two years, in the United Kingdom 70,000 human embryos died during the implementation of ”In Vitro” fertilization method, and only 8300 children were born. Since the sperm fertilizes the egg and the human zygote appears, we deal with a man whose life has exactly the same value that has the life of each of us, those who were born and who live on this earth. Here is a law in the Scriptures that shows the fetus’ value:

If men struggle with each other and strike a woman with child so that she gives birth prematurely, yet there is no injury, he shall surely be fined as the woman’s husband may demand of him, and he shall pay as the judges decide. But if there is any further injury, then you shall appoint as a penalty life for life, eye for eye, tooth for tooth, hand for hand, foot for foot, burn for burn, wound for wound, bruise for bruise. (Exodus 21:22-25)(NASB)

Both doctors and men and women who resort to this method are aware from the beginning that they agree to the conceiving of children, most of which will be killed. Are they also aware that they will give account of the lives of their own killed children?

Artificial insemination involves the murder of children by abortion

When fertilization is outside the body, more embryos are created in the test tube. Thus, doctors apply the conceiving of more “spare” embryos (children), given that only 1 or at the most 2 of 10 will survive and will be alive until birth. Then, several embryos are transferred into the womb of the mother, expecting that at least one of them will implant successfully. As a result, multiple pregnancy occur most often and then, doctors use the so called “embryonic reduction” which means that some embryos (children) are eliminated (killed), to allow the survival of one or two embryos . The elimination of the embryos from the body is abortion and murder.

What normal person would accept to send their child to prison? Nobody can even think of such a thing. Preparing the artificial insemination, doctors seek to obtain a large number of embryos. Then, a small part of these embryos (people who have life) are transferred into the womb of the mother and another part will be kept for future treatment or experience. These embryos are stored to be frozen and can be kept in that condition for a long time.

Artificial insemination is an attempt to change God’s plan

It is written in the Bible that God is the One who makes a woman to give birth or to be barren. The same applies to men. Therefore, it is good to realize this, and to receive both children and impossibility to have our own children as something that comes from God. Then, throughout the Bible it is told about many women who were sterile for a period of time and then God gave them children, as it is written in the Book of Psalms:

He makes the barren woman abide in the house as a joyful mother of children. Praise the LORD! (Psalm 113:9)(NASB)

When people have waited patiently until God worked in their lives and gave them children, they had only joy and blessings. That happened in the lives of Rachel, Anna, Elizabeth, etc.

The Bible tells us, however, cases when someone wanted to help God and have resorted to a method of conceiving the child outside the body of the woman who was part of the covenant of marriage, similar to ”in vitro” insemination and this has brought them great sufferings. Sarah did that, she was sterile and God had promised her that she would have a son. Here’s what she did:

So Sarai said to Abram, “Now behold, the LORD has prevented me from bearing children. Please go in to my maid; perhaps I will obtain children through her.” And Abram listened to the voice of Sarai. After Abram had lived ten years in the land of Canaan, Abram’s wife Sarai took Hagar the Egyptian, her maid, and gave her to her husband Abram as his wife. He went in to Hagar, and she conceived; and when she saw that she had conceived, her mistress was despised in her sight. (Genesis 16:2-4)(NASB)

It was only the beginning of the problems. Later many other problems came from Hagar and from Ishmael who was born and those problems have extended over the people of Israel until today. When we want to help God with our own “inventions”, we always suffer a lot. But God kept His promise, and Sarah gave birth to her own child, who inherited the promises of God. Sarah, however, has not killed any of her children.

When people, in utter despair to have children, accept to kill many other children of theirs to have one, these sins will not remain unpunished. And artificial insemination can not be done without these murders of children, that are embryos.

In the UK, during 1991-1998, of the 750,000 embryos that were created by artificial fertilization, 237,000 were destroyed and 48,000 were donated for research. There are known cases where the embryos that were surplus were used to produce cosmetics. When I told my wife that, she said: “Even fascists have not acted this way…”. Moreover, it is well known that in concentration camps the fascists sought to use everything for their economy: the ashes of burned people as fertilizer to grow cabbage, hair was used to make pillows, out of people’s skin they made leather gloves and soap out of their fat. I saw these products at the war museum in Kiev. How can someone who has resorted to artificial insemination, sleep quietly when he knows that some of his children will be frozen or destroyed, or donated for research, or used for producing cosmetics?

The most known commandment of the Ten Commandments is “Thou shalt not kill.” God also says about the value of the lives of those children who were killed as the result of “in vitro” insemination experiment:

In Moldova, the artificial insemination procedure is performed “successfully” for 10 years, as claimed by professionals, and couples pay for this $1500. Are parents and doctors that resort to this method aware of the value of their children’s lives, whom they leave for experiments and then kill? Are they really aware that they will give account before God? As God does this in the Bible, the church also condemns this practice of death.

And what is the solution for the couples that can not have children?

To adopt orphan children. In this way, they will save the lives and the future of orphans and will not give birth to their own children to kill the most of them. Here’s what Scripture says about it:

Pure and undefiled religion in the sight of our God and Father is this: to visit orphans and widows in their distress, and to keep oneself unstained by the world. (James 1:27)(NASB)

To visit here means to be fully involved in the life of someone who needs to be supported, to be helped. The first on this list is the orphan and who shows mercy to an orphan and helps, support, raises him, gives evidence of a true faith in God. Those who show mercy to orphans and then give them a future and a hope will have a very beautiful testimony before God and before people. God help us to look at the human life’s value just as He looks at it.