How to understand and apply the verse in the Sermon on the mount that says not to throw pearls before swine? 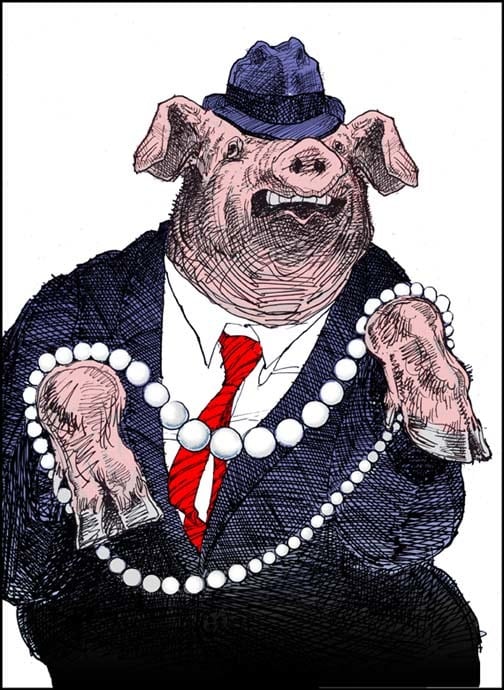 In the beginning let us look at …

The biblical text in context

The text is a conclusion on an issue addressed by the Lord Jesus in the famous Sermon on the mount.For a better understanding, I will quote the full text addressing this subject:

Do not judge so that you will not be judged. For in the way you judge, you will be judged; and by your standard of measure, it will be measured to you. Why do you look at the speck that is in your brother’s eye, but do not notice the log that is in your own eye? Or how can you say to your brother, ‘Let me take the speck out of your eye,’ and behold, the log is in your own eye? You hypocrite, first take the log out of your own eye, and then you will see clearly to take the speck out of your brother’s eye. Do not give what is holy to dogs, and do not throw your pearls before swine, or they will trample them under their feet, and turn and tear you to pieces. (Matthew 7:1-6)(NASB)

What does the immediate context tell us?

The main subject addressed by the Lord Jesus in this passage is the right and wrong judgment, the emphasis being put on unfair judgment. Usually people take only the first sentence of this biblical paragraph and use it to argue that any judgment is absolutely prohibited by God. But it is not so.  The whole passage shows that God will judge us by the way how we judge and He wants to be just in our judgments. A right man will judge firstly things in his life and character  that do not match with justice, and only then will judge others with the purpose to help and not to condemn them.  The example with the speck and the log shows that the purpose of judgment is to help man to overcome or to free himself from the lacks of his character. A hypocritical man, however, will not judge himself, but will close his eyes to the great shortcomings and misdoings he commits, but will judge the small things from the characters and lives of others. The next verse continues the same idea and the one called hypocritical, is also called dog and swine, for he uses the judgment, a holy thing, to trample under his feet others and to tear them to pieces.

Dogs have been offered the chance of salvation

In a certain context, the Lord Jesus referred to pagans, calling them ”dogs”, and that because of the sins and misdoings pagans lived in, not seeking the face of God.

Jesus went away from there, and withdrew into the district of Tyre and Sidon. And a Canaanite woman from that region came out and began to cry out, saying, “Have mercy on me, Lord, Son of David; my daughter is cruelly demon-possessed.” But He did not answer her a word. And His disciples came and implored Him, saying, “Send her away, because she keeps shouting at us.” But He answered and said, “I was sent only to the lost sheep of the house of Israel.” But she came and began to bow down before Him, saying, “Lord, help me!” And He answered and said, “It is not good to take the children’s bread and throw it to the dogs.” But she said, “Yes, Lord; but even the dogs feed on the crumbs which fall from their masters’ table.” Then Jesus said to her, “O woman, your faith is great; it shall be done for you as you wish.” And her daughter was healed at once. (Matthew 15:21-28)(NASB)

The woman did not try to contradict with the Lord Jesus that it would be otherwise, that she would not be derived from “dogs”, i.e pagans but requested healing for her daughter and received it. So every pagan can receive forgiveness if he comes to ask it by faith of the Lord Jesus. But, there are some that like to live in sin, even if they claim to be holy, they remain dogs.

Beware of the bad dogs

Like a dog that returns to its vomit is a fool who repeats his folly. (Proverbs 26:11)(NASB)

So, do not trust a fool holy things, because at any moment he can turn to his folly and then he will come to trample you under feet and tear you to pieces.Have you not seen such examples?

When he writes with reference to false teachers who were preaching circumcision as a condition for salvation, Apostle Paul wrote the Philippians:

In this case,the holy thing which those people received has been the teaching of the Old Testament to guide them to Christ, but they, in the wickedness of their heart, use this holy thing to turn against those saved by faith, wanting to take them from Christ and to trample them under their feet.

The apostle Peter called some “dogs” when he said:

For it would be better for them not to have known the way of righteousness, than having known it, to turn away from the holy commandment handed on to them. It has happened to them according to the true proverb, “A DOG RETURNS TO ITS OWN VOMIT,” and, “A sow, after washing, returns to wallowing in the mire.” (2 Peter 2:21-22)(NASB)

The holy thing they were entrusted with is the “holy commandment” through which they have been discovered “the way of salvation”, but they have trampled this holy thing and now attack the church seeking to tear some through some destructive heresies and to trample them under feet.

Beware of such people that are called dogs and swine and that behave so.