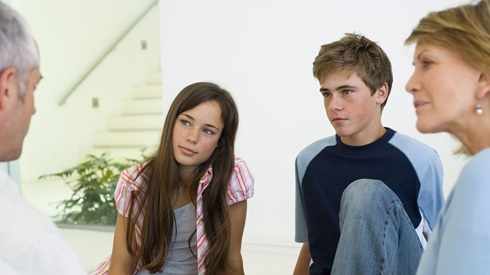 When you talk to parents today it seems like their number one desire for their children is to make things better for them financially or materially speaking than when they were growing up. Parents seem to focus so much on this that they seem to forget about the importance of protecting them from evil and in many cases the parents are the ones who put their children in harms way by bring the children face to face with evil. For example, one parent says that he did not have a television in his room growing up so he wants his child to have one. The child now has access to channels with all kinds of evil. I know this from personal experience. Another example would be the computer. Parents want their children to be in line with the neighbors’ kids so they buy a computer and put internet connection in the child’s room. The computer in itself is a wonderful gift that can bring a lot of good but having internet connection in the child’s room, especially if it does not have a filter is a terrible idea because wanted or not all kinds of wicked things will make their way to the child. Therefore, as parents, it is very important that we protect our children from the evil that is around them.

The wise man Solomon was not born with all of his wisdom; he received it from the Lord, through the help of his father, King David. David played a crucial role in educating Solomon in the ways of the Lord. David teaches the following lesson about friendship in Psalm 1 when he says, “How blessed is the man who does not walk in the counsel of the wicked, Nor stand in the path of sinners, Nor sit in the seat of scoffers! (Psalm 1:1). Avoid evil or wicked friends, their ways, and definitely their advice. Why? First of all you or your child will not be blessed. Most importantly though is that they will have a negative impact on you. David says in another psalm, “Do not incline my heart to any evil thing, To practice deeds of wickedness With men who do iniquity; And do not let me eat of their delicacies.” (Psalm 141:4). Evil people will incline your heart to evil, to practice deeds of wickedness. It is hard enough to get children to be obedient and follow the Lord but when wicked friends begin to influence them then it becomes almost impossible. I have a friend who is a former homosexual. He told me the story of how he became homosexual; he assured me that he was not born that way. He met some people who were homosexuals and befriended them. He said that they constantly talked about their lifestyle in his presence and it got to the point where he felt pressured to try what they were always talking about. He had never in his life even thought about the wickedness that they were describing but because of the pressure and constant reminder of their lifestyle, he began to ponder on the things that they were talking about. He finally decided to try homosexuality because of all the pressure that was being put on him. Once he tried it, he went down a long spiraling path that led him to slavery, slavery to homosexuality and he wanted out but could not break the bonds. Fortunately for Him, he met some people who shared the Gospel with him and the fact that Jesus can set anyone free from slavery to sin. He accepted Christ and received the liberation that he wanted so desperately. This is a prime example of what evil friends will do to a child.

Parents with common sense explain the consequences of bad friends

Many times parents tell their children to avoid certain people and things but they do not explain why, usually saying something like, “because I said so”. Children need an explanation because that is how they learn. I want to present some of the consequences of bad friends. The Apostle Paul has left us with a quote that has become very popular although many of those who use this quote have no idea that it comes from the Bible. “Do not be deceived: “Bad company corrupts good morals.” (1 Corinthians 15:33). Friends who have bad habits will influence you if you spend enough time with them. When I was a student at the University I had many friends who were good people but they hung out with the wrong crowd. The corruption took place little by little. First they would begin going to dance clubs with their friends. Their excuse was always the same, “I want to hang out with my friends and show them that you can have a good time without drinking alcohol”. Whose influence won in the end? Of course those who wanted to go innocently, for fun, became the life of all of the parties, forgetting about school and of course suffering the consequences. I saw it happen many times. I warned each one but they all had the same answer and ended up supporting the same consequences. Bad company always corrupts good morals. Also most people who now smoke started because they had friends who smoked when they were younger. Bad friends will also deceive you. The Apostle Paul confirms this when he writes, “Let no one deceive you with empty words, for because of these things the wrath of God comes upon the sons of disobedience. Therefore do not be partakers with them;” (Ephesians 5:6-7). Avoid evil friends because not only will they deceive you but they will also cause you to be punished by God. Homosexuals want the world to believe that their lifestyle is normal and there are some who promote that homosexuality is actually better than heterosexuality. They use many deceptive ways and if you are not careful then you will find yourself trapped in their web of deception. Homosexuals have an agenda, to “inform” people about homosexuality so that their influence will grow causing their power to grow. I was shocked when I read an article written by a homosexual group which said that one of the reasons that homosexuals wanted to start advertising using television commercials in a certain State in the United States so that people will be better informed and the influence and power of homosexuals will grow. They want to use people for their own purposes. If you know the story if Lot, from the Bible, and how he was affected by the immorality that was around him on a daily basis (homosexuals) because he lived in Sodom. In fact his family was destroyed by all of the perversion around him. His two daughters got to the point where they practiced incest with their own father. Bad company corrupts good morals.

It is very important for children to have good friends who are examples. Children are so easily influenced so why not let them be influenced for good and not for evil. Solomon describes this idea in one of his proverbs when he says, “The righteous is a guide to his neighbor, But the way of the wicked leads them astray.” (Proverbs 12:26). Good friends will help reinforce the teachings that you give to your children instead of discouraging them as evil friends will do. Also David affirms this idea in Psalm one, that is to have friends who will be a good influence when he says, “But his delight is in the law of the LORD, And in His law he meditates day and night.” (Psalm 1:2). If you teach your children the Word of God and their friends are people who delight in the Word of God then the influence upon them will be great, causing them to walk in the Lord’s ways both at home and when away from home, that is, when they are with their friends. We see that the Lord will protect your child as you also seek his protection, teaching him to obey the Lord and choose friends wisely. Your child will have a bright future, leaving behind a legacy that you can be proud of. So many parents are ashamed of the actions that their children take these days but it does not have to be this way. You can make a difference by protecting your child from evil influences.