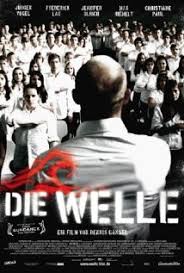 On the recommendation of our daughter, last night our family watched the movie “The Wave”. The film is about a professor of political science at a university in Germany who makes an experiment to show his students that they can return to dictatorship even in a democratic society, as the one they have in their country today. The students were very suspicious at first, but as the experiment was going on, except for two students, all were caught in this wave and began to divinize their leader (the teacher took this position). As the experiment progressed, it was increasingly difficult to be controlled and when the teacher announced the end of the project, one of the students who were most affected by the effects of dictatorship was so disappointed that he shot one of his colleague and then shot himself in head and the teacher went to prison.

Today I pondered over what I have seen in the movie (which was cast based on real facts) and once again I realized how easily people are manipulated both where it is believed that it is a backward society and where people are convinced that it is a progressive society. Why are people so easily manipulated? Because the prince of this world darkens their minds. Therefore it is written in the Scripture:

So this I say, and affirm together with the Lord,that you walk no longer just as the Gentiles also walk, in thefutility of their mind, beingdarkened in their understanding,excluded from the life of God because of theignorance that is in them, because of thehardness of their heart; and they, havingbecome callous,have given themselves over tosensualityfor the practice of every kind of impurity with greediness. (Ephesians 4:17-19)(NASB)

At the same time, I thought that the current political context of our country, when people are so disappointed by the current political class that looks very corrupt and impotent to do something good for the country, there is very great danger that a bad man may appear and establish dictatorship. God preserve us from this great evil. Today, the Christians of the Church “Bunavestirea” fast for several reasons including the improvement of the political situation in the country. We also pray that God may keep us from all evil and that He may bless the governing officials to do their job well, so that we may lead a tranquil and quiet life in all godliness and dignity. So God help us!