Why did Jesus after raising from the dead, didn’t show Himself to Pilate and the Pharisees so that they could believe in Him, instead He just showed Himself to the disciples and the 500 people?

When the rich man from the example with Lazarus was in the Sheol he had the same conversation with Abraham :

And he said, ‘Then I beg you, father, that you send him to my father’s house— for I have five brothers—in order that he may warn them, so that they will not also come to this place of torment.’ But Abraham said, ‘They have Moses and the Prophets; let them hear them.’ But he said, ‘No, father Abraham, but if someone goes to them from the dead, they will repent!’ But he said to him, ‘If they do not listen to Moses and the Prophets, they will not be persuaded even if someone rises from the dead.’” (Luke 16:27-31)

This text holds the answer to your question. The rich men believed that if a man that rose from the dead will show up to his brothers they would believe and would change their behavior and attitude towards God and towards their neighbors. But Abraham told him that if they don’t listen to Moses and the prophets, and didn’t listen to the word of God written in the Holy Bible, they wouldn’t believe even if a person rose from the dead. And that’s what happened in the case with Jesus Christ. I will quote also a passage from Matthew. After the crucifixion that’s what the enemies of Jesus Christ undertook.

Now on the next day, the day after the preparation, the chief priests and the Pharisees gathered together with Pilate, and said, “Sir, we remember that when He was still alive that deceiver said, ‘After three days I am to rise again. ’Therefore, give orders for the grave to be made secure until the third day, otherwise His disciples may come and steal Him away and say to the people, ‘He has risen from the dead,’ and the last deception will be worse than the first. “Pilate said to them, “You have a guard; go, make it as secure as you know how.” And they went and made the grave secure, and along with the guard they set a seal on the stone. (Matthew 27:62-66 ) 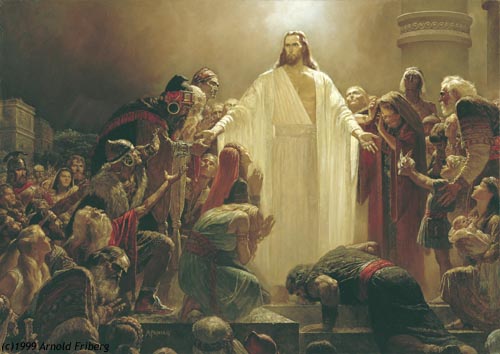 Let’s say that until here they thought that Jesus was misleading and they took all the measures of being cautious so the lies wouldn’t spread. But that’s what happened the morning that Jesus rose from the dead, the event where the guards ( at least four of them ) were a witness too:

Now after the Sabbath, as it began to dawn toward the first day of the week, Mary Magdalene and the other Mary came to look at the grave. And behold, a severe earthquake had occurred, for an angel of the Lord descended from heaven and came and rolled away the stone and sat upon it. And his appearance was like lightning, and his clothing as white as snow. The guards shook for fear of him and became like dead men. (Matthew 28:1-4 )

The guards, these Roman guards they saw the angel and they understood very good the message that Jesus Christ has risen. It would be normal to believe that after they went and told the higher people what happened, they would all repent and believe in Jesus Christ that has risen, all of them Pilate and the Pharisees and the enemies of Jesus Christ. But that didn’t happen. That’s what the guards did:

Now while they were on their way, some of the guard came into the city and reported to the chief priests all that had happened. And when they had assembled with the elders and consulted together, they gave a large sum of money to the soldiers, and said, “You are to say, ‘His disciples came by night and stole Him away while we were asleep.’ And if this should come to the governor’s ears, we will win him over and [a]keep you out of trouble.” And they took the money and did as they had been instructed; and this story was widely spread among the Jews, and is to this day. (Matthew 28:11-15 )

The guards saw with their own eyes and told the truth to the highest priests. What would be the purpose for Jesus to show himself to these people, when they rejected any argument. They already had all the proof needed to believe in Jesus Christ; anyway they worked against it so people wouldn’t know the truth.

But then there was a huge blessing and honor showed by Jesus Christ to those that He showed Himself too and not all of them were made worthy of it. Disbelief disqualified most of them.