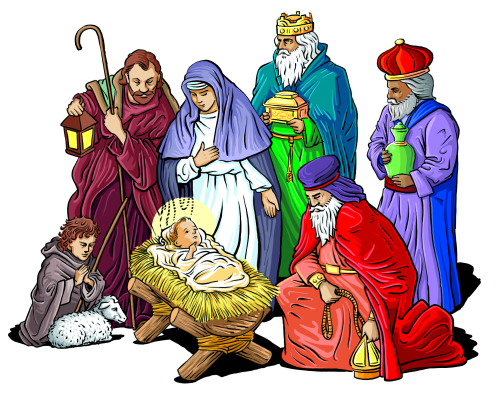 Some years ago I was in United States of America before Christmas. It seems that this holiday is the most important for the people of this country. In a night while I and a friend of mine were on our way from Sacramento to Castro Valley, we saw an inscription that moved me a lot written with very big letters that were lightning. It was written “Jesus is the Reason for the Season!” The meaning of this inscripton is very deep and it implies a sad reality. People celebrate Christmas all around, but even the most civilized countries haven’t kept anything from the initial meaning of this holiday. In another year I and my wife were in the airport from Amsterdam and a group of musicians were going through the halls of the airport and were playing very nicely the musical instruments. But during many hours we haven’t heard at least one play of a Christmas song and this after so many musical operas had been created ever so long. The situation in Moldova is not better. During the long sovietical periond of atheism, people had known only about an inveted Santa Claus, but thay had forgotten about the One whose birthday we celebrate for Christmas, about the Lord Jesus, the King of kings and the Lord of lords. Let us see…

What does the Bible relate about the appearance of Christmas?

Luke, the author of the Gospel that has his name, was a very educated for that time Greek. He found good that “having investigated everything carefully from the beginning, to write it out for you in consecutive order” (Luke 1:3). So, he was saying that:

Now in the sixth month the angel Gabriel was sent from God to a city in Galilee called Nazareth, to a virgin engaged to a man whose name was Joseph, of the descendants of David; and the virgin’s name was Mary. And coming in, he said to her, “Greetings, favored one! The Lord is with you.” But she was very perplexed at this statement, and kept pondering what kind of salutation this was. The angel said to her, “Do not be afraid, Mary; for you have found favor with God. And behold, you will conceive in your womb and bear a son, and you shall name Him Jesus. He will be great and will be called the Son of the Most High; and the Lord God will give Him the throne of His father David; and He will reign over the house of Jacob forever, and His kingdom will have no end.” Mary said to the angel, “How can this be, since I am a virgin?” The angel answered and said to her, The Holy Spirit will come upon you, and the power of the Most High will overshadow you; and for that reason the holy Child shall be called the Son of God. And behold, even your relative Elizabeth has also conceived a son in her old age; and she who was called barren is now in her sixth month. For nothing will be impossible with God.” And Mary said, “Behold, the bondslave of the Lord; may it be done to me according to your word.” And the angel departed from her. (the Gospel of Luke 1:26–38)(NASB)

When Joseph, her husband found out that Mary was pregnant, his heart began to be suspicious and disappointed, but he…

being a righteous man and not wanting to disgrace her, planned to send her away secretly. But when he had considered this, behold, an angel of the Lord appeared to him in a dream, saying, “Joseph, son of David, do not be afraid to take Mary as your wife; for the Child who has been conceived in her is of the Holy Spirit. She will bear a Son; and you shall call His name Jesus, for He will save His people from their sins.” Now all this took place to fulfill what was spoken by the Lord through the prophet: “BEHOLD, THE VIRGIN SHALL BE WITH CHILD AND SHALL BEAR A SON, AND THEY SHALL CALL HIS NAME IMMANUEL,” which translated means, “GOD WITH US.”  And Joseph awoke from his sleep and did as the angel of the Lord commanded him, and took Mary as his wife, but kept her a virgin until she gave birth to a Son; and he called His name Jesus. (the Gospel of Matthew 1:19–25)(NASB)

But, when Mary was going to give birth…

Now in those days a decree went out from Caesar Augustus, that a census be taken of all the inhabited earth. This was the first census taken while Quirinius was governor of Syria. And everyone was on his way to register for the census, each to his own city. Joseph also went up from Galilee, from the city of Nazareth, to Judea, to the city of David which is called Bethlehem, because he was of the house and family of David, in order to register along with Mary, who was engaged to him, and was with child. While they were there, the days were completed for her to give birth. And she gave birth to her firstborn son; and she wrapped Him in cloths, and laid Him in a manger, because there was no room for them in the inn. In the same region there were some shepherds staying out in the fields and keeping watch over their flock by night. And an angel of the Lord suddenly stood before them, and the glory of the Lord shone around them; and they were terribly frightened. But the angel said to them, “Do not be afraid; for behold, I bring you good news of great joy which will be for all the people; for today in the city of David there has been born for you a Savior, who is Christ the Lord. “This will be a sign for you: you will find a baby wrapped in cloths and lying in a manger.” And suddenly there appeared with the angel a multitude of the heavenly host praising God and saying, “Glory to God in the highest, and on earth peace among men with whom He is pleased.” When the angels had gone away from them into heaven, the shepherds began saying to one another, “Let us go straight to Bethlehem then, and see this thing that has happened which the Lord has made known to us.” So they came in a hurry and found their way to Mary and Joseph, and the baby as He lay in the manger. When they had seen this, they made known the statement which had been told them about this Child. And all who heard it wondered at the things which were told them by the shepherds. But Mary treasured all these things, pondering them in her heart. The shepherds went back, glorifying and praising God for all that they had heard and seen, just as had been told them. (the Gospel of Luke 2:1–20)(NASB)

At Christmas the Son of God became flesh

If the evangelists Matthew and Luke begin their relatings about the birth of Jesus from Nazareth, then John, the author of the Gospel who has his name begins the relating about Jesus from eternity, where the Son of God comes from. John calls Jesus here as “the Word of God” and he begins the Gospel with this passage:

In the beginning was the Word, and the Word was with God, and the Word was God. He was in the beginning with God. All things came into being through Him, and apart from Him nothing came into being that has come into being. In Him was life, and the life was the Light of men. The Light shines in the darkness, and the darkness did not comprehend it. There came a man sent from God, whose name was John. (he was refering to John the Baptist). He came as a witness, to testify about the Light, so that all might believe through him. He was not the Light, but he came to testify about the Light. There was the true Light which, coming into the world, enlightens every man. He was in the world, and the world was made through Him, and the world did not know Him. He came to His own, and those who were His own did not receive Him. But as many as received Him, to them He gave the right to become children of God, even to those who believe in His name, who were born, not of blood nor of the will of the flesh nor of the will of man, but of God. The Word Made Flesh and the Word became flesh, and dwelt among us, and we saw His glory, glory as of the only begotten from the Father, full of grace and truth. John testified about Him and cried out, saying, “This was He of whom I said, ‘He who comes after me has a higher rank than I, for He existed before me.’” For of His fullness we have all received, and grace upon grace. For the Law was given through Moses; grace and truth were realized through Jesus Christ. No one has seen God at any time; the only begotten God who is in the bosom of the Father, He has explained Him. (the Gospel of John 1:1–18)(NASB)

This is the esence of the holiday, this is what we celebrate at Christmas – the great event when the Son of God, who is with God from eternity, through whom all things came into being and through whom we were created – He became flesh, so that He might bring to us the truth about eternal life and the grace of God. This is the greatest holiday from the Universe and it is important to know how to know…

How to celebrate Cristmas in a nice way?

As the Holy Scriptures relates to us “All things came into being through Him”, through Jesus, the Son of God who became flesh at the first Christmas. “The world was made through Him, but the world didn’t know Him. He came to His own and those who were His own did not receive Him.”  Nothing else that would make people’s Christmas nice matters. If they haven’t received the Lord Jesus, if they haven’t received the salvation from sins that He offers, then Christmas holiday is a reson to remember and to think that they are the most miserable persons, because they continued and continue into the darkness of sins and desperation.

Those who celebrate Christmas in its all fullness are those who have received Him, those who believe in the Name of Jesus and to whom He, the great King of Kings gave the right to become children of God. How much my life was changed in the day I believed in Him and how much joy my heart has received and still receives from His knowledge and relation that I have with the Word who became flesh. By faith in Jesus I was born again for a new life. The old and worthless for His kingdom things passed away and now all things are new. This year I will celebrate Christmas with a heart full of joy for the salvation He has brought to me. May God bless you, dear reader of this message to experience on your own the joy of knowing Jesus Christ and of the faith with all you heart in Him at this Christmas.