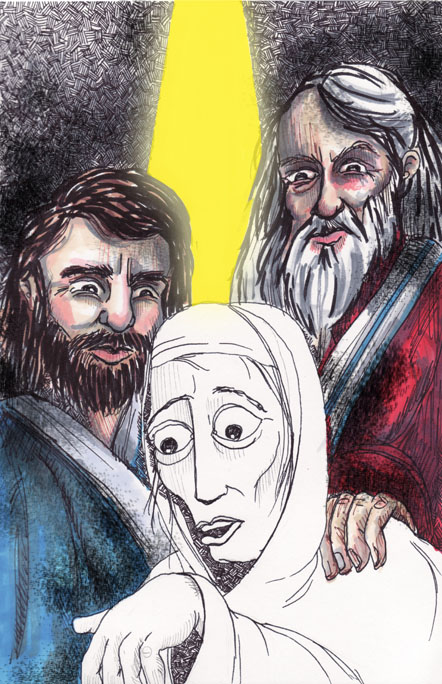 The third beatitude said by the Lord Jesus on the Sermon of the Mount is:

Blessed are the gentle, for they shall inherit the earth. (Matthew 5:5)(NASB)

Let us learn a lesson of kindness from Moses, the man about whom God says that he was the most humble man in the world:

Then Miriam and Aaron (the sister and brother of Moses) spoke against Moses because of the Cushite woman whom he had married (for he had married a Cushite woman); and they said, “Has the LORD indeed spoken only through Moses? Has He not spoken through us as well?” And the LORD heard it. (Now the man Moses was very humble, more than any man who was on the face of the earth.) Suddenly the LORD said to Moses and Aaron and to Miriam, “You three come out to the tent of meeting.” So the three of them came out. Then the LORD came down in a pillar of cloud and stood at the doorway of the tent, and He called Aaron and Miriam. When they had both come forward, He said, ”Hear now My words: If there is a prophet among you, I, the LORD, shall make Myself known to him in a vision I shall speak with him in a dream. Not so, with My servant Moses, He is faithful in all My household; with him I speak mouth to mouth, even openly, and not in dark sayings, and he beholds the form of the LORD. Why then were you not afraid to speak against My servant, against Moses?” So the anger of the LORD burned against them and He departed. But when the cloud had withdrawn from over the tent, behold, Miriam was leprous, as white as snow. As Aaron turned toward Miriam, behold, she was leprous. Then Aaron said to Moses, “Oh, my lord, I beg you, do not account this sin to us, in which we have acted foolishly and in which we have sinned. Oh, do not let her be like one dead, whose flesh is half eaten away when he comes from his mother’s womb!” Moses cried out to the LORD, saying, “O God, heal her, I pray!” Numbers 12:1–13)(NASB)

What do you do when you are wronged?What do you ask from God for your enemies?