And you were dead in your trespasses and sins, in which you formerly walked according to the course of this world, according to the prince of the power of the air, of the spirit that is now working in the sons of disobedience. Among them we too all formerly lived in the lusts of our flesh, indulging the desires of the flesh and of the mind, and were by nature children of wrath, even as the rest. (Ephesians 2:1-3)

Lately, Halloween is becoming increasingly popular in Romania, that hasn’t previously known and celebrated this holiday. What is the origin and meaning of this holiday? How should we, as Christians, relate to it?

To understand the essence of Halloween and how it relates to the teaching left by God on the pages of the Scripture, it is important to firstly understand …

Wikipedia Encyclopedia tells us the following about Halloween:

Halloween, a contraction of All-Hallows-Eve (“evening”), is an annual holiday observed on October 31, and common activities include guising/trick-or-treating, attending costume parties, carving jack-o’-lanterns, lighting bonfires, apple bobbing, visiting haunted attractions, playing pranks, telling scary stories, and watching horror films.The word Halloween is first attested in the 16th century and represents a Scottish variant of the fuller All-Hallows-Even (“evening”), that is, the night before All Hallows Day. Children go in costume from house to house, asking for treats such as candy or sometimes money, with the question, “Trick or treat?” The word “trick” refers to a (mostly idle) “threat” to perform mischief on the homeowners or their property if no treat is given.

The history of Halloween

The same article in Wikipedia tells us the following:

Historian Nicholas Rogers, exploring the origins of Halloween, notes that while “some folklorists have detected its origins in the Roman feast of Pomona, the goddess of fruits and seeds, or in the festival of the dead called Parentalia, it is more typically linked to the Celtic festival of Samhain (pronounced sow-an or sow-in)”, derived from the Old Irish Samuin meaning “summer’s end”.Samhain was the first and by far the most important of the four quarter days in the medieval Irish and Scottish calendar and, falling on the last day of Autumn, it was a time for stock-taking and preparation for the cold winter months ahead.There was also a sense that this was the time of year when the physical and supernatural worlds were closest and magical things could happen. To ward off these spirits, the Gaels built huge, symbolically regenerative bonfires and invoked the help of the gods through animal and perhaps even human sacrifice.

The reader may ask then, if this holiday was originally named Samhain…

What is the origin of the name “Halloween”?

In 835 Pope Gregory IV changed the day of celebration of all the martyrs from May 13 to November 1. Later, the celebration was called “All Saints Day”. The night before this holiday, that is the evening of October 31 was named the All-Hallow’s Even or “Holly Evening” which in translation means the evening or night of All Saints. Then, the name was shortened to what we know today – Halloween. 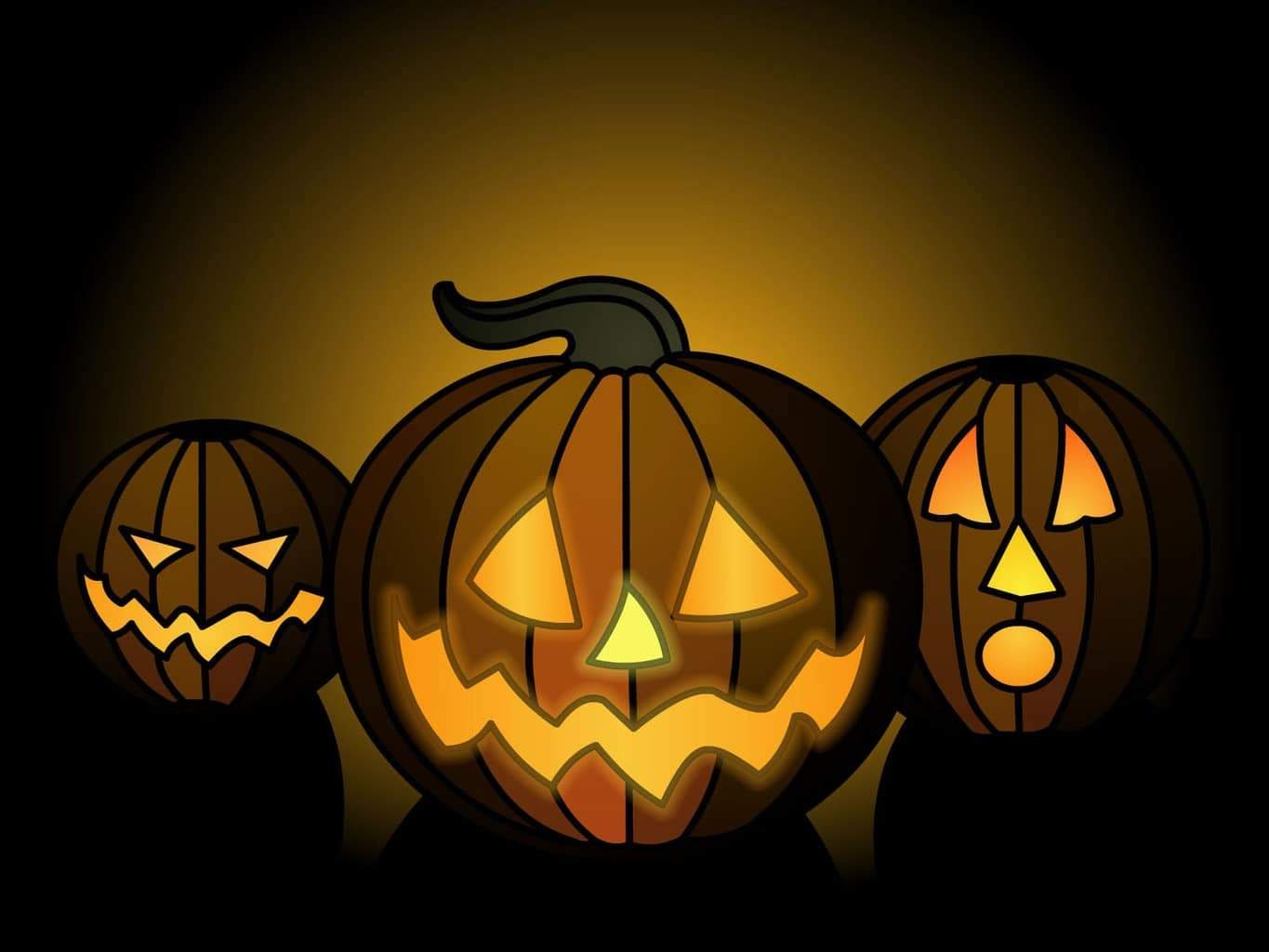 What do people celebrate at Halloween?

It is obvious that in today world no one remembers the saints and this evening was transformed into one when people imitate evil spirits, skeletons, black cats, all sorts of horrors and it is if they imitate evil spirits through all their actions. History shows that the Catholic Church through Pope Gregory IV tried to replace a pagan holiday with a Christian one, but as a result, the pagan and devilish holiday has absorbed completely every Christian aspect of this holiday.

What does God say about Halloween’s practices?

At Halloween both adults and children dress themselves in clothes of wizards and grown-ups appeal to occult practices and call the dead, being also masked in all that is evil. In the book of Deuteronomy, God commanded as follows:

When you enter the land which the LORD your God gives you, you shall not learn to imitate the detestable things of those nations. There shall not be found among you anyone who makes his son or his daughter pass through the fire, one who uses divination, one who practices witchcraft, or one who interprets omens, or a sorcerer, or one who casts a spell, or a medium, or a spiritist, or one who calls up the dead. For whoever does these things is detestable to the LORD; and because of these detestable things the LORD your God will drive them out before you. You shall be blameless before the LORD your God. For those nations, which you shall dispossess, listen to those who practice witchcraft and to diviners, but as for you, the LORD your God has not allowed you to do so. (Deuteronomy 18:9-14)(NASB)

Then, in the book of Leviticus this commandment is repeated:

Do not turn to mediums or spiritists; do not seek them out to be defiled by them. I am the LORD your God. (Leviticus 19:31)(NASB)

It is absolutely clear that all these practices celebrated at Halloween, even if they are performed as a joke, are an abomination before God and they defile the people. We, Christians, must keep ourselves away from them.

The Bible teaches that there is a spiritual world, which is invisible and wages a great war against Christians. In the city of Ephesus there was a lot of magic and spiritualism. This is what Scripture tells us about the context of the city of Ephesus and how these evil and devilish spirits were condemned when Paul came and preached the gospel:

And he entered the synagogue and continued speaking out boldly for three months, reasoning and persuading them about the kingdom of God. But when some were becoming hardened and disobedient, speaking evil of the Way before the people, he withdrew from them and took away the disciples, reasoning daily in the school of Tyrannus. This took place for two years, so that all who lived in Asia heard the word of the Lord, both Jews and Greeks. God was performing extraordinary miracles by the hands of Paul, so that handkerchiefs or aprons were even carried from his body to the sick, and the diseases left them and the evil spirits went out. But also some of the Jewish exorcists, who went from place to place, attempted to name over those who had the evil spirits the name of the Lord Jesus, saying, “I adjure you by Jesus whom Paul preaches.” Seven sons of one Sceva, a Jewish chief priest, were doing this. And the evil spirit answered and said to them, “I recognize Jesus, and I know about Paul, but who are you?” And the man, in whom was the evil spirit, leaped on them and subdued all of them and overpowered them, so that they fled out of that house naked and wounded. This became known to all, both Jews and Greeks, who lived in Ephesus; and fear fell upon them all and the name of the Lord Jesus was being magnified. Many also of those who had believed kept coming, confessing and disclosing their practices. And many of those who practiced magic brought their books together and began burning them in the sight of everyone; and they counted up the price of them and found it fifty thousand pieces of silver. So the word of the Lord was growing mightily and prevailing. (Acts 19:8-20)(NASB)

Precisely because in the city of Ephesus there were performed many wicked and devilish things by spiritualism and magic that were there, the Apostle Paul wrote to Ephesians Christians and teaches them and us …

Be aware of the presence and strategies of evil spirits

Chapter 2 of the Epistle to Ephesians begins this way:

And you were dead in your trespasses and sins, in which you formerly walked according to the course of this world, according to the prince of the power of the air, of the spirit that is now working inthe sons of disobedience. Among them we too all formerly lived in the lusts of our flesh, indulging the desires of the flesh and of the mind, and were by nature children of wrath, even as the rest. (Ephesians 2:1-3)(NASB)

According to these verses, everyone who does not know and did not receive Jesus as the Lord and Savior walks according to the course given by the prince of the power of the air, by the spirit that now is working in the sons of disobedience, that are those who refused and refuse to live according to the teaching of God and who live indulging the desires of the flesh. People think and say they are free, but in reality thy are dead in their trespasses and sins and are slaves of the devil. Do they, like ignorant slaves, like zombies, celebrate at Halloween their bondage and tragedy in which they live? Christians have been freed from this ignorance and God teaches us this:

So this I say, and affirm together with the Lord, that you walk no longer just as the Gentiles also walk, in the futility of their mind, being darkened in their understanding, excluded from the life of God because of the ignorance that is in them, because of the hardness of their heart; and they, having become callous, have given themselves over to sensuality for the practice of every kind of impurity with greediness. (Ephesians 4:17-19)(NASB)

We need to share the gospel with the pagans, as are called those who do not know Lord Jesus and are darkened in their understanding, excluded from the life of God because of the ignorance that is in them because of the hardness of their heart. At Halloween they give themselves over to sensuality for the practice of every kind of impurity with greediness. We should tell them about this, but let us to do it with love and show them God’s love that has been poured in the Lord Jesus Christ. Also, we, Christians, should …

In the same Epistle to the Ephesians, to the end, the Apostle Paul tells the believers from Ephesus words that are of great importance for all Christians of all times and thus, for us, too:

Finally, be strong in the Lord and in the strength of His might. Put on the full armor of God, so that you will be able to stand firm against the schemes of the devil. For our struggle is not against flesh and blood, but against the rulers, against the powers, against the world forces of this darkness, against the spiritual forces of wickedness in the heavenly places. Therefore, take up the full armor of God, so that you will be able to resist in the evil day, and having done everything, to stand firm. Stand firm therefore, HAVING GIRDED YOUR LOINS WITH TRUTH, and HAVING PUT ON THE BREASTPLATE OF RIGHTEOUSNESS, and having shod YOUR FEET WITH THE PREPARATION OF THE GOSPEL OF PEACE; in addition to all, taking up the shield of faith with which you will be able to extinguish all the flaming arrows of the evil one. And take THE HELMET OF SALVATION, and the sword of the Spirit, which is the word of God. With all prayer and petition pray at all times in the Spirit, and with this in view, be on the alert with all perseverance and petition for all the saints. (Ephesians 6:10-18)(NASB)

Halloween is a direct confrontation between the forces of darkness and the children of God. Therefore, let us take up the full armor of God and tell people the truth of the Word of God, so that they may be saved.