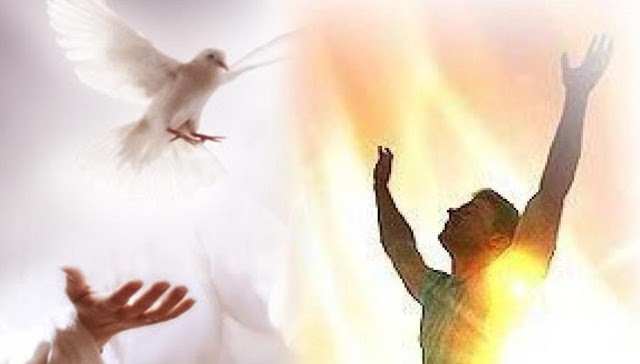 The first manifestations of the baptism with the Holy Spirit

When the day of Pentecost had come, they (the disciples) were all together in one place. And suddenly there came from heaven a noise like a violent rushing wind, and it filled the whole house where they were sitting. And there appeared to them tongues as of fire distributing themselves, and they rested on each one of them. And they were all filled with the Holy Spirit and began to speak with other tongues, as the Spirit was giving them utterance. Now there were Jews living in Jerusalem, devout men from every nation under heaven. And when this sound occurred, the crowd came together, and were bewildered because each one of them was hearing them speak in his own language. They were amazed and astonished, saying, “Why, are not all these who are speaking Galileans? And how is it that we each hear them in our own language to which we were born? Parthians and Medes and Elamites, and residents of Mesopotamia, Judea and Cappadocia, Pontus and Asia, Phrygia and Pamphylia, Egypt and the districts of Libya around Cyrene, and visitors from Rome, both Jews and proselytes, Cretans and Arabs–we hear them in our own tongues speaking of the mighty deeds of God.” (Acts 2:1–11)(NASB)

The manifestation of the baptism with the Holy Spirit of the disciples that were together in one place and that are described in this passage, are the following:

Other manifestation of the baptism with the Holy Spirit

As soon as people came and asked for explanations regarding what had happened to the disciples in the day of Pentecost, Apostle Peter answered to those who were preaching about the Lord Jesus a message that pierced to the heart.

Now when they heard this, they were pierced to the heart, and said to Peter and the rest of the apostles, “Brethren, what shall we do?” Peter said to them, “Repent, and each of you be baptized in the name of Jesus Christ for the forgiveness of your sins; and you will receive the gift of the Holy Spirit. For the promise is for you and your children and for all who are far off, as many as the Lord our God will call to Himself.” And with many other words he solemnly testified and kept on exhorting them, saying, “Be saved from this perverse generation!” (Acts 2:37–40)(NASB)

Let us see how the Word of God describes the manifestation of the baptism with the Holy Spirit to those who received the preaching of Apostle Peter:

So then, those who had received his word were baptized; and that day there were added about three thousand souls. They were continually devoting themselves to the apostles’ teaching and to fellowship, to the breaking of bread and to prayer. Everyone kept feeling a sense of awe; and many wonders and signs were taking place through the apostles. And all those who had believed were together and had all things in common; and they began selling their property and possessions and were sharing them with all, as anyone might have need. Day by day continuing with one mind in the temple, and breaking bread from house to house, they were taking their meals together with gladness and sincerity of heart, praising God and having favor with all the people And the Lord was adding to their number day by day those who were being saved. (Acts 2:41–47)(NASB)

After the sermon of Apostle Peter we see that those who were baptized with the Holy Spirit didn’t experience the noise of the violent rushing wind, the tongues of fire and speaking with other tongues, but it is evident that a great change took place in their lives, that was demonstrated in the following way:

The manifestation of filling with the Holy Spirit

The baptism with the Holy Spirit happens only once in life, when a man believes with all his heart in the Lord Jesus, when he repents and enters the covenant with Him. Filling with the Holy Spirit refers to some certain life situations in a Christian life, when he needs more courage, strength, wisdom, etc. But this doesn’t mean that a Christian lives without the guidance of the Holy Spirit when he doesn’t face these situations. An example is described in the Book of Acts, chapters 3 and 4. After apostles Peter and John healed the crippled man at the gate of the Temple and after many people believed in Lord Jesus, apostles were brought before the Council to account of what had happened. They preached with an unusual boldness. In the end, they were threatened not to preach the Name of God anymore to not be persecuted.

But Peter and John answered and said to them, “Whether it is right in the sight of God to give heed to you rather than to God, you be the judge; for we cannot stop speaking about what we have seen and heard.” When they had threatened them further, they let them go (finding no basis on which to punish them) on account of the people, because they were all glorifying God for what had happened; for the man was more than forty years old on whom this miracle of healing had been performed. When they had been released, they went to their own companions and reported all that the chief priests and the elders had said to them. And when they heard this, they lifted their voices to God with one accord and said, “O Lord, it is You who MADE THE HEAVEN AND THE EARTH AND THE SEA, AND ALL THAT IS IN THEM, who by the Holy Spirit, through the mouth of our father David Your servant, said, ’WHY DID THE GENTILES RAGE, AND THE PEOPLES DEVISE FUTILE THINGS? ’THE KINGS OF THE EARTH TOOK THEIR STAND, AND THE RULERS WERE GATHERED TOGETHER AGAINST THE LORD AND AGAINST HIS CHRIST.’ ”For truly in this city there were gathered together against Your holy servant Jesus, whom You anointed, both Herod and Pontius Pilate, along with the Gentiles and the peoples of Israel, to do whatever Your hand and Your purpose predestined to occur. ”And now, Lord, take note of their threats, and grant that Your bond-servants may speak Your word with all confidence, while You extend Your hand to heal, and signs and wonders take place through the name of Your holy servant Jesus.” And when they had prayed, the place where they had gathered together was shaken, and they were all filled with the Holy Spirit and began to speak the word of God with boldness. (Acts 4:19–31)(NASB)